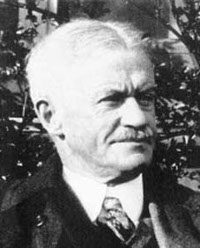 Albert Jay Nock (13 October 1870 – 19 August 1945) was an American libertarian author, editor first of The Freeman and then The Nation, educational theorist, Georgist and social critic of the early and middle 20th century.He was an outspoken opponent of the New Deal, and served as a fundamental inspiration for the modern libertarian and Conservative movements, cited as an influence by William F. Buckley Jr. He was one of the first Americans to self-identify as "libertarian". His best-known books are Memoirs of a Superfluous Man and Our Enemy, the State.

This article is derived from the English Wikipedia article "Albert Jay Nock" as of 23 Jun 2018, which is released under the Creative Commons Attribution-Share-Alike License 3.0.