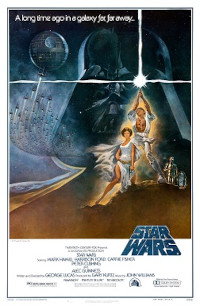 18. Star Wars (1977), plus sequels. Aided by cute droids, Luke, Princess Leia, and smuggler Han rebel against the ultimate Evil Empire.
Related Topics: Braveheart, Brazil, Casablanca, Duck Soup, Fahrenheit 451, The Fountainhead, Freedom's Flicks, The Godfather, Gone With the Wind, Invasion of the Body Snatchers, A Man for All Seasons, Network, Ninotchka, One Flew Over the Cuckoo's Nest, The Quiet Man, Schindler's List, The Searchers, Sleeper, The Ten Commandments, What About Bob?
How Star Wars Can Lead America Off the Dark Path, by Dan Sanchez, 4 May 2017
Examines the first two Star Wars trilogies, drawing parallels to 20th and 21st century U.S. and world history, and draws lessons from the films that could help the United States from "giving in to the dark side"

May the 4th (be with you) has become a day to celebrate Star Wars, the cinematic saga of an interplanetary civilization's struggles with galactic war and tyranny ... The story of how the Galactic Empi-re arose is told in the prequels trilogy. The whole process is orchestrated from within the Galactic Republic by Palpatine ... When Anakin is brought before Yoda as a child, the Jedi Master senses much fear in the boy: specifically fear of losing his mother ... Throughout the original ... trilogy, Luke faces challenges similar to those of his father ... Skywalker's heroic victory was that he resisted terror, renounced hate, and rejected aggression.
Related Topics: Friedrich Hayek, Robert Higgs, Non-aggression principle, The State, Terrorism, United States, War

Doug Casey on the Silver Screen, by Doug Casey
Interviewed by Louis James, Editor, International Speculator; brief reviews of many movies and some TV series

L: ... This may surprise some people, but I found the original Star Wars movies uplifting and even philosophically useful. I liked that Han Solo was an unabashed capitalist and black-marketer. George Lukas' first movie ... THX 1138 ... was slow and rather boring. I always thought that some older hand must have taken Lukas under his wing and said, 'George, that was great – really important stuff. But people won't get it. There were no explosions, no villain in black, no jet fighters. Try throwing in a princess that needs rescuing, next time. Maybe some funny robots ...'
Related Topics: Casablanca, Hombre, The Sand Pebbles
Star Wars (1977, 1980, 1983, 1999, 2002, 2005), by Stephen W. Carson

The ambitious Star Wars films tell of the rise, fall into evil & ultimate redemption of Anakin Skywalker through his son Luke. Set against the decline of the Old Republic into an evil Galactic Empire and the rebellion against that Empire, this tale has profound relevance for our time.

Eddie Izzard - Death Star Canteen, 30 Jun 2007
Lego animation of comedian Eddie Izzard imagining Darth Vader making a visit to the canteen of the Death Star
Star Wars Original Trailer (Restored) - 1976, 1976
What's So Bad About The Galactic Empire?, by Sean Malone, 4 May 2017
Analyzes the various Star Wars movies and attempts to answer the title question and conversely what is good about the Rebel Alliance

Everyone familiar with Star Wars knows that the Empire is bad, and the Rebellion is good. But, why? ... But here's what we do know. First, there's a lot of smuggling in the Star Wars universe. And that probably means that there are a lot of laws and regulations making various goods and services costly or illegal.
Related Topics: Democracy, Individual Liberty, Militarism

The introductory paragraph uses material from the Wikipedia article "Star Wars (film)" as of 9 Oct 2018, which is released under the Creative Commons Attribution-Share-Alike License 3.0.