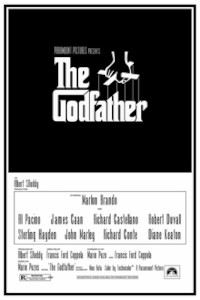 The Godfather is a 1972 American crime film directed by Francis Ford Coppola and produced by Albert S. Ruddy, based on Mario Puzo's best-selling novel of the same name. It stars Marlon Brando and Al Pacino as the leaders of a fictional New York crime family. The story, spanning 1945 to 1955, chronicles the family under the patriarch Vito Corleone (Brando), focusing on the transformation of Michael Corleone (Pacino) from reluctant family outsider to ruthless mafia boss.

20. The Godfather (1972). When you outlaw drugs and gambling, you get corrupt politicians and cops, murder, and great gangster movies.
Related Topics: Braveheart, Brazil, Casablanca, Duck Soup, Fahrenheit 451, The Fountainhead, Freedom's Flicks, Gone With the Wind, Invasion of the Body Snatchers, A Man for All Seasons, Network, Ninotchka, One Flew Over the Cuckoo's Nest, The Quiet Man, Schindler's List, The Searchers, Sleeper, Star Wars, The Ten Commandments, What About Bob?
Mafia Movies, by Murray Rothbard, The Rothbard-Rockwell Report, Nov 1990
Contrasts The Godfather's I and II with Goodfellas

But the great classic, the definitive, superb Mafia movie was The Godfathers I and II, in which Francis Ford Coppola poured out a work of genius, grounded in his own and novelist Mario Puzo's cultural history ... The Godfathers were perfection: an epic world, a world of drama and struggle, tautly organized and memorably written, beautifully and broodingly photographed ...
Related Topic: Anarcho-Capitalism

Arts and Movies, by Mr. First Nighter, The Libertarian Forum, Jun 1972
Reviews of the movies Sometimes a Great Notion (1971) and The Godfather (1972)

The Godfather is one of the great movies of the last several years, and its enormous popularity is eminently well deserved. In the first place. it is a decidedly Old Culture movie, or "movie-movie"; it is gloriously arriere-garde, and there is not a trace of the avant-garde gimmicks and camera trickery ... It is a picture with heroes and villains, good guys and bad guys ... The pace is terrific, the suspense and plot and direction and acting all excellent. Many of the lines are memorable, and "we're going to make him an offer he can't refuse" has already burned its way indelibly into American culture.
Related Topic: United States Presidents
Arts And Movies, by Mr. First Nighter, The Libertarian Forum, Jan 1973
Discusses cinema as of 1972, contrasting the intellectuals' choices to those of the bourgeoisie, choosing an "eight best" list of 1972 movies and closing with comments on various movie critics

Certainly the best film of 1972 was The Godfather, which we have already hailed in these pages ... Already, of course. both the masses and the intelligentsia have spoken: the masses by perceptively making The Godfather the box-office smash of all time; the intellectuals by rejecting it for ... Bergman's latest, Cries and Whispers ... Best director ... Francis Ford Coppola gets our accolade. For best actor it's for me a tossup between Al Pacino and Marlon Brando in our favorite movie. Brando's acting was a mighty and brilliant tour de force, by far the best Brando in that actor's checkered career.
Related Topics: Films, The Oscars
The Godfather trilogy (1972, 1974, 1990), by Stephen W. Carson

... the Godfather movies bring those who are willing to the recognition of the true nature of men in power. Underneath all the pomp and circumstance, all the glad-handing and talk of serving the people, the various gangsters in power over us ultimately always have 'an offer that you can't refuse.' ... If you thought these were just gangster films, you missed the point.

The introductory paragraph uses material from the Wikipedia article "The Godfather" as of 19 Jul 2018, which is released under the Creative Commons Attribution-Share-Alike License 3.0.