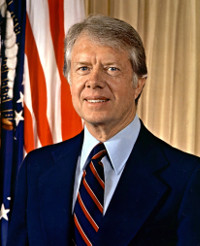 James Earl Carter Jr. (born 1 October 1924) is an American politician who served as the 39th president of the United States from 1977 to 1981. He previously was the 76th Governor of Georgia from 1971 to 1975, after two terms in the Georgia State Senate from 1963 to 1967. Carter has remained active in public life during his post-presidency, and in 2002 he was awarded the Nobel Peace Prize.

Emergencies: The Breeding Ground of Tyranny, by William L. Anderson, Future of Freedom, Nov 2006
Examines the long history of "emergency powers" claimed by U.S. Presidents, including recent examples such as sanctions stemming from the International Economic Powers Act and the so-called War on Terror

In the first year of Jimmy Carter's presidency, Congress passed the International Economic Powers Act [IEPA] ... in November 1979, while Iran and the United States were trading partners, Iranian students and demonstrators took over the U.S. embassy in Tehran, holding embassy personnel as hostages. (The crisis began when the Carter administration permitted the deposed shah to receive medical treatment for cancer in New York City ...) Under the authority granted in the IEPA, Carter declared economic sanctions on Iran (that remain in effect to this day), which ... dried up trade between the two countries ...
Related Topics: American War Between the States, Government, Law, Abraham Lincoln, Franklin D. Roosevelt, Terrorism, George Washington, Woodrow Wilson
End Draft Registration!, by Sheldon Richman, 29 Dec 2006
Comments on the proposal by Rep. Charles Rangel to resume military conscription and examines the history of the draft and the registration requirement

The draft ended in 1973, toward the close of the war in Vietnam. But President Jimmy Carter ordered every 18-year-old male to register with Selective Service in 1979 when the Soviets invaded Afghanistan. This was his way of showing his disapproval of the invasion. How it was supposed to accomplish that is anybody's guess. Ten years later the Soviets left Afghanistan in embarrassing defeat. That was also when the Soviets' Warsaw bloc started collapsing and the member countries turned away from communism. But did President George H.W. Bush end draft registration? No, he didn't. An oversight, I guess.
Related Topic: War
Lies and Leviathan, by James Bovard, Future of Freedom, Aug 2006
Describes the deceit used to institute and expand the U.S. Social Security program, as well as various other programs such as job training and placement, the No Child Left Behind Act, the Office of Strategic Influence, and various duplicitous officials

In 1976, Democratic presidential nominee Jimmy Carter promised that he would never lie to the American people. By 1980, his promise was a source of mirth. On the campaign trail, Ronald Reagan, after reciting Carter's pledge, would comment, "That reminds me of the quote from ... Emerson: 'The more he talked of his honor, the faster we counted our spoons.'" The quip got audiences laughing and nodding because it hit home. Governor Bill Clements of Texas, a Democrat, condemned Carter as a "goddamn liar" for claiming that his oil-profits tax program resulted in an increase in the number of oil wells that had been drilled ...
Related Topics: George W. Bush, Compulsory Education, Government, Social Security Tax, Taxation
Pentagon Whistle-Blower on the Coming War With Iran, by Karen Kwiatkowski, James Harris, Josh Scheer, 27 Feb 2007
Interviewed by James Harris and Josh Scheer of Truthdig; topics include possible conflict with Iran, the Pentagon situation prior to the March 2003 invasion of Iraq, the Office of Special Plans, Vietnam, terrorism and neoconservatism

And [Henry Jackson] was a pro, or I should say strongly anti-Communist democrat, kind of a strong defense democrat. And these guys migrated, particularly after Jimmy Carter, because Jimmy Carter, remember, what was he doing, he was trying to make peace. Remember that, somebody got a Peace Prize out of it, I don't know what it was, some kind of approach between Arabs and Israelis, and Carter was part of that ... So many of these conservative, pro-defense democrats, anti-Communist democrats abandoned the democratic party ... particularly after the time of Jimmy Carter and his summit working on Middle East peace.
Related Topics: George W. Bush, Iraq, Iraq War, Republican Party, Terrorism, Vietnam War, War
Trump’s Support and Praise of Despots Is Central to the U.S. Tradition, Not a Deviation From It, by Glenn Greenwald, 2 May 2017
Discusses recent criticism of Donald Trump that claims that his foreign policy towards known dictators and tyrants constitutes a major shift, when in fact that has been standard U.S. policy since at least the end of World War II

In 1977, Jimmy Carter attended a state dinner in Tehran for the Shah of Iran, the savage U.S.-supported despot who ruled that country for decades after the CIA overthrew its democratically elected leader. It took place shortly after Carter hosted the Shah at the White House. The U.S. president hailed the Iranian tyrant with a long toast ... As Carter spoke, his praise for the homicidal Iranian despot became more flowery and obsequious ... Two years later, those same people whom Carter claimed revered the Shah overthrew him and, to this day, loathe the U.S. because of the decades of support and praise it heaped on their dictator.
Related Topics: Chile, Democracy, Egypt, Honduras, Barack Obama, Saudi Arabia, United States, Venezuela
Under the Shadow of Inflationomics, by Hans Sennholz, Mises Daily, 1 Jun 2006
Explains how inflation has its roots in central banking and fiat money, and describes the influence of Keynesian economics on the policies of U.S. presidents from Richard Nixon to George W. Bush

The Carter Administration's chief economic affliction was rampant inflation and the decline of the dollar's value in relation to that of other major currencies. No matter what it did to assist the dollar, including 'massive intervention' in international currency markets, a quintupling of gold sales, and an increase in the discount rate, inflation rose in each year of the Carter Administration.
Related Topics: George H. W. Bush, George W. Bush, Central Banking, Bill Clinton, Gold Standard, Inflation, Money, Richard Nixon, Ronald Reagan
U.S. Hypocrisy on Iran, by Sheldon Richman, 14 Feb 2007
Discusses the hypocrisy of Bush administration pronouncements and actions about Iran "meddling in Iraq", considering the U.S. intervention in Iran in 1953 and the U.S. invasion and continued occupation of Iraq

Many Americans have no idea [the 1953 Iran regime change] happened ... One such American is Dinesh D'Souza, whose new book argues that radical Muslims like Osama bin Laden and those who flew airplanes into the World Trade Center "hate us for how we use our freedom." D'Souza's historical "knowledge" of U.S.-Iran relations goes all the way back to — 1979. As he wrote in the Washington Post, "President Jimmy Carter's withdrawal of support for the shah of Iran, for example, helped Ayatollah Khomeini's regime come to power in Iran, thus giving radical Islamists control of a major state."
Related Topics: George W. Bush, Iran, Iraq

The introductory paragraph uses material from the Wikipedia article "Jimmy Carter" as of 22 May 2018, which is released under the Creative Commons Attribution-Share-Alike License 3.0.