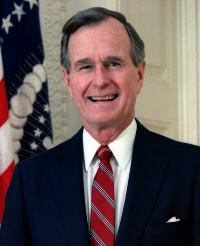 George Herbert Walker Bush (born June 12, 1924) is an American politician who served as the 41st President of the United States from 1989 to 1993. Prior to assuming the presidency, Bush served as the 43rd Vice President of the United States from 1981 to 1989. A member of the Republican Party, he had previously been a Congressman, Ambassador and Director of Central Intelligence. During his career in public service, he was known simply as George Bush; since 2001, he has often been referred to as "George H. W. Bush", "Bush 41", or "George Bush Senior" in order to distinguish him from his eldest son, George W. Bush, the 43rd president of the United States. He is the nation's oldest living president and vice president, as well as the longest-lived president in history.

Let's fast-forward ... to the presidential elections of the 1990s. Pat Buchanan challenged George Bush for the Republican nomination, saying that Bush had made two unforgivable errors: he waged an unjust war against Iraq and he raised taxes ... But Buchanan lost the nomination, and refused to pursue a third-party option. Rothbard then turned to Perot ... on the same grounds: Perot blasted Bush's war and his taxes. Then Perot suddenly pulled out. That left Bush and Clinton, whose foreign policy was no different from Bush's but whose domestic policy was worse. Rothbard then rooted for Bush against Clinton.
Related Topics: Cato Institute, Cold War, Karl Hess, Libertarianism, Libertarian Party, Ludwig von Mises, Justin Raimondo, Murray Rothbard
Machiavelli and U.S. Politics, Part 3: Lies and Appearances, by Lawrence M. Ludlow, 19 Aug 2005
Continues examination of Machiavelli's teachings and comparison to recent U.S. presidential promises and actions

Didn't President George H.W. Bush say, 'Read my lips' as he campaigned against raising taxes? ... He was not held accountable for meddling in the 1991 dispute between Iraq and Kuwait over the Kuwaiti practice of slant-drilling to siphon off Iraqi oil. He was not held accountable for backing the sanctions that caused the deaths of hundreds of thousands of Iraqi children in the 1990s. This, in addition to his continued support for Israel and placement of American armed forces in Islamic holy places led to the attack on the World Trade Center in 1993 and its destruction in 2001.
Related Topics: George W. Bush, Bill Clinton, Law, Politics, Ronald Reagan
The Reagan Roadmap for Antiterrorism Disaster, by James Bovard, CounterPunch, 8 Oct 2003
Details events before and after the 23 Oct 1983 bombing of the U.S. Marine barracks in Beirut

Vice President George H.W. Bush rationalized: "It's awfully hard to guard against that kind of terrorism." ... In the vice presidential candidates debate, George H. W. Bush denounced Democratic candidate Walter Mondale and his vice presidential pick, Geraldine Ferraro: "For somebody to suggest, as our opponents have, that these men died in shame, they had better not tell the parents of those young marines." Neither Mondale nor Ferraro had said that the Marines "died in shame." Bush denounced Mondale for running a "mean-spirited campaign" ...
Related Topics: George W. Bush, Lebanon, Ronald Reagan, Terrorism
The Repudiation of Bush, by Sheldon Richman, 10 Nov 2006
Comments on the results of the November 2006 U.S. mid-term elections and on replacement of Donald Rumsfeld by Robert Gates, formerly in the George H. W. Bush administration

[Former] CIA chief Robert Gates ... may come from the former President Bush's team of "realists," but let's not forget that this team was capable of foreign intervention too. Remember Iraq, Somalia, and Panama. And let's not forget that Bush 41 and his team were part of the Reagan administration, which intervened directly in Lebanon and Grenada, while also meddling in Latin America and Africa. Gates also was involved in the Iran-Contra scandal, which circumvented the law by selling arms to the Ayatollah Khomeini and using the money to intervene in Nicaragua's civil war.
Related Topics: George W. Bush, Democratic Party, Government, Iraq War
Standing Armies, Political Mischief, by Lew Rockwell, 6 Oct 2000
Discusses a poll by the Wall Street Journal about a possible "October Surprise" that would bolster the presidential aspirations of Al Gore

But the origins of Iraq campaign prop are actually pre-Clinton. When Iraq first annexed its ancient province of Kuwait during a dispute about oil prices, it was shown that Saddam believed he had secured agreement from US ambassador April Glaspie and a group of visiting US senators including Bob Dole. Then George Bush turned a border oil dispute into a world-historic crime. Bush dropped bombs and his popularity soared to 90 percent, but, alas, his timing was off and the war bump dwindled by election time.
Related Topics: Bill Clinton, Cold War, Ronald Reagan, War
Under the Shadow of Inflationomics, by Hans Sennholz, Mises Daily, 1 Jun 2006
Explains how inflation has its roots in central banking and fiat money, and describes the influence of Keynesian economics on the policies of U.S. presidents from Richard Nixon to George W. Bush

President George Herbert Walker Bush resolutely returned to Keynesian formulas of spending and happily continued the budget deficits. During his first year in office (1989) his administration enjoyed a $152 billion deficit, in its last year (1993) a $255 billion shortage. After a prolonged battle with the Democratic Congress he agreed to a deficit reduction bill that raised business taxes. He thereby broke his 1988 campaign pledge not to raise taxes, which irritated many Republicans. His presidency was marked by a stagnant economy, rising levels of unemployment, and a prolonged international recession.
Related Topics: George W. Bush, Jimmy Carter, Central Banking, Bill Clinton, Gold Standard, Inflation, Money, Richard Nixon, Ronald Reagan

The introductory paragraph uses material from the Wikipedia article "George H. W. Bush" as of 31 May 2018, which is released under the Creative Commons Attribution-Share-Alike License 3.0.