Signer of the U.S. Declaration of Independence, president of the Second Continental Congress 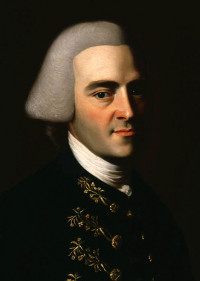 John Hancock (23 January 1737 [O.S. 12 January 1736] – 8 October 1793) was an American merchant, statesman and prominent Patriot of the American Revolution. He served as president of the Second Continental Congress and was the first and third Governor of the Commonwealth of Massachusetts. He is remembered for his large and stylish signature on the United States Declaration of Independence, so much so that the term John Hancock has become a synonym in the United States for one's signature.

"The signature of John Hancock on the Declaration of Independence is the most flamboyant and easily recognizable of all. It is perhaps no surprise that the story of his part in the revolution is equally engaging. Few figures were more well known or more popular than John Hancock. He played an instrumental role, sometimes by accident, and other times by design, in coaxing the American Revolution into being. ... The story, entirely unfounded, is that on signing the Declaration, Hancock commented, 'The British ministry can read that name without spectacles; let them double their reward.'"

Benjamin Franklin: The Man Who Invented the American Dream, by Jim Powell, The Freeman, Apr 1997
Lengthy biographical essay, including a section on the posthumous publication and reaction to Franklin's Autobiography

"When time came to sign the Declaration on August 2, John Hancock, President of Congress reportedly remarked: 'We must be unanimous; there must be no pulling different ways; we must all hang together.' According to legend—not any contemporary accounts—Franklin urged that the Declaration be adopted unanimously, saying 'we must, indeed, all hang together, or most assuredly we shall all hang separately.'"
Related Topics: John Adams, American Revolutionary War, United States Constitution, United States Declaration of Independence, Entrepreneurship, France, Benjamin Franklin, Thomas Jefferson, Massachusetts, Thomas Paine, Pennsylvania, Philadelphia, No Quartering of Soldiers, Taxation, George Washington
How Much Do You Know About Liberty? (a quiz), The Freeman, Jun 1996
A 20-question quiz (with answers) on various topics related to liberty in the history of the United States

"A signature to the Declaration of Independence ... would be regarded in England as treason ... In this work of treason, John Hancock [1737-1793] led the way, as President of the Congress; and by the force with which he wrote, he seems to have determined that his name should never be erased. This gentleman, who, from his conspicuous station in the Continental Congress of 1776, claims our first notice, was born in the town of Quincy, in the state of Massachusetts ... In 1766, he was placed by the suffrages of his fellow citizens in the legislature of Massachusetts, and this event seems to have given a direction to his future career."

The introductory paragraph uses material from the Wikipedia article "John Hancock" as of 09 May 2018, which is released under the Creative Commons Attribution-Share-Alike License 3.0.