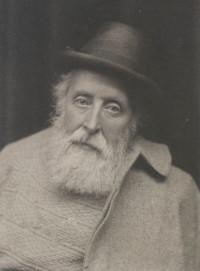 Auberon Edward William Molyneux Herbert (18 June 1838 in Highclere – 5 November 1906) was a writer, theorist, philosopher and 19th century individualist. A member of the Parliament of the United Kingdom, Herbert was a son of the 3rd Earl of Carnarvon. He was Member of Parliament for the two member constituency of Nottingham between 1870-1874.

Auberon Herbert was a British writer and political theorist. He was the most consistent advocate of libertarian doctrines writing in late Victorian Britain. Among his systematic works on the role of politics in society were A Politician in Trouble about His Soul (1883–1884), The Right and Wrong of Compulsion by the State (1885), and The Voluntaryist Creed (1908). Herbert also played an important role in public life. He was a Liberal member of the House of Commons from 1870 to 1874 and from the 1880s onward strove to create a host of libertarian political associations.
Related Topics: Property Rights, Self-ownership, Herbert Spencer, Taxation

Auberon Edward William Molyneux Herbert (1838–1906) was born into the ruling class. As the son of the 3rd Earl of Carnarvon and brother to the 4th earl, Herbert attended both Eton College, which has traditionally been called "the chief nurse of England's statesmen," and St. John's College, Oxford ... Upon meeting the individualist philosopher Herbert Spencer in 1873, however, Herbert became cemented in his decision not to seek reelection. In an essay posthumously published in his book The Voluntaryist Creed (Oxford University Press, 1908), Herbert explained Spencer's impact upon him ...
Related Topics: Anarchism, Government, Self-ownership, Herbert Spencer, Voluntaryism, War
Benjamin Tucker, Individualism, & Liberty: Not the Daughter but the Mother of Order, by Wendy McElroy, Literature of Liberty, 1981
Bibliographical essay covering the people and radical movements that influenced Tucker in his founding and publishing of Liberty, its major themes and contributors

Auberon Herbert's Free Life (1890–1901) ... was perhaps the most prominent British libertarian periodicals ... Of Free Life and Herbert, Tucker wrote: "In a letter to me, written when he was contemplating the establishment of The Free Life, Mr. Herbert proposed that, in case of any friendly discussion between his journal and mine, each should reprint all that the other might say. Mr. Herbert will observe that I have been prompt to act upon his suggestion, and I have no doubt that he will reciprocate ..." The "friendly discussion" referred to involved anarchism, which Herbert rejected.
Related Topics: American War Between the States, Anarchism, Australia, Children, France, William Lloyd Garrison, Henry George, Germany, Government, Labor, Libertarianism, Liberty, Nonviolent resistance, Relationships, Freedom of Religion, Russia, Self-ownership, Spain, Herbert Spencer, Lysander Spooner, Benjamin Tucker, Josiah Warren
Here are 7 lesser-known classical liberal thinkers for your World Philosophy Day, by Kelly Wright, 17 Nov 2016
Brief profiles of Spencer, Tucker, Spooner, Paterson, Molinari, Garrison and Herbert, together with a reading recommendation for each one of them

Auberon Herbert was a 19th century writer, philosopher, and individualist. During his time in Parliament he was an outspoken advocate of secularism, especially as it related to public education. Following political life, he was an avid supporter of the aforementioned Herbert Spencer. He would later dub his Spencerian-like flavor of individualism as 'voluntaryism.' Ever critical of the political system and the behavior it rewards, Herbert was a vocal critic of political parties.
Related Topics: William Lloyd Garrison, Gustave de Molinari, Isabel Paterson, Herbert Spencer, Lysander Spooner, Benjamin Tucker
W(h)ither Public Schools?, by Sheldon Richman, Separating School & State, 1994
Chapter 1, made available online on 19 May 2004 to celebrate the tenth publication anniversary; discusses how even mild "public school" reforms are treated as "deadly threats", why a new vision is needed and the role of the family in educating children

Auberon Herbert, a libertarian in 19th century England, saw this clearly when he wrote:

Whoever fairly faces the question must admit that the same set of arguments which condemns a national religion also condemns a national system of education. It is hard to pronounce sentence on the one and absolve the other. Does a national church compel some to support system to which they are opposed? So does a national system of education. Does the one exalt the principle of majorities over the individual conscience? So does the other ... Does the one chill and the repress higher meanings and produce formalism? So does the other.

Who is your greatest inspiration?
... I am currently going through ... Auberon Herbert's periodical The Free Life, and I am more impressed by its quality than I expected. My former exposure to the British individualist Herbert–famous for popularizing the term "Voluntaryist"–was largely through exchange of debate within Liberty with his American counterparts. I thought Herbert argued well but I underrated him ... I finished reading a series of his commentaries that, taken collectively, constitute the single best refutation of Georgism I can imagine. The Free Life has changed my mind on several points of theory, which is no mean feat.
Related Topics: Libertarianism, Mises Institute, Murray Rothbard, Benjamin Tucker

The introductory paragraph uses material from the Wikipedia article "Auberon Herbert" as of 11 Mar 2018, which is released under the Creative Commons Attribution-Share-Alike License 3.0.