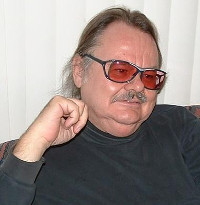 Samuel Edward Konkin III (8 July 1947 – 23 February 2004), also known as SEK3, was the author of the publication New Libertarian Manifesto and a proponent of a political philosophy which he named agorism. [Image © Pulpless.com and J. Neil Schulman. Used with permission]

Samuel Edward Konkin III, the creator of the political and economic system known as 'agorism,' was born in Saskatchewan, on July 8, 1947. ... Among important figures in the development of the modern libertarian movement, Konkin stands out in his insistence that libertarianism rightly conceived belongs on the radical left wing of the political spectrum. ... A controversial and eccentric figure in the libertarian movement, Konkin left a legacy of challenging, radical ideas that, due to the connectedness and fluidity of the Internet and virtual, peer-to-peer networks, are perhaps more relevant than ever.
Related Topics: Agorism, Politics, Murray N. Rothbard
Jeff Riggenbach on Samuel Edward Konkin III, by Jeff Riggenbach, Freedom Network News, 2004
Lengthy biographical and memorial essay

Samuel Edward Konkin III was born in Saskatchewan, Canada on July 8, 1947 ... he grew up in and around Edmonton, finishing high school there and entering the University of Alberta, where he graduated, cum laude, in 1968. By the time he reached the University of Wisconsin later that same year to begin graduate studies in chemistry, he was a confirmed science fiction fan and was particularly enamored of the works of Robert A. Heinlein ... Before too many more months had passed, Sam had joined Wisconsin YAF and been selected as a delegate to the YAF national convention in St. Louis in August 1969.
Related Topics: Roy Childs, Williamson Evers, Robert A. Heinlein, Laissez Faire Books, Robert LeFevre, Libertarian Party, Liberty International, Ludwig von Mises, Murray N. Rothbard, George H. Smith
Samuel Edward Konkin III, by Jeff Riggenbach, 29 Jul 2010
Biographical essay, including examination of Konkin's ideas on the Counter-Economy; transcript of "The Libertarian Tradition" podcast of 20 July 2010; includes photo of Konkin with author

His name was Samuel Edward Konkin III. He was born in Saskatchewan ... on July 8, 1947 ... Looking back, it seems clear that the '70s and '80s were Sam's peak years—his time in the sun. He published aggressively during that period—not only New Libertarian but a dozen other newsletters and various pamphlets as well, including his famous New Libertarian Manifesto, with endorsements from both Rothbard and LeFevre ... Sam opened his publications to every libertarian point of view. At the top of his masthead, in every issue, he proudly printed the statement, "Everyone appearing in this publication disagrees!"
Related Topics: Agorism, Robert A. Heinlein, Libertarianism, Los Angeles, The Moon is a Harsh Mistress, New York City
Wendy McElroy on Sex, Rape and Libertarian Feminism, by Wendy McElroy, Anthony Wile, 11 Mar 2012
Topics discussed include McElroy's early life, two of her notable books, individualist anarchism, voluntarism, conspiracy theories, religions, banks and money, feminism, capitalism, Austrian economics, Julian Assange and the future

I understand why you would ask about identification with leftist anarchism, however. Many current anarchists who could lay claim to the label "individualist" prefer to call themselves "left-libertarian anarchists." The label originated with a now-deceased old friend named Samuel E. Konkin III. One defining aspect of left-libertarianism is an avid rejection of corporations as creations of the state with artificial privileges not possessed by individuals, such as limited liability. I agree with that assessment but I prefer the adjective "individualist," perhaps for sentimental reasons.
Related Topics: Individualist Anarchism, Money, Ayn Rand, Murray N. Rothbard, Freedom of Speech, Sweden, Technology, Voluntaryism

On Political Activism, Reason, May 1977
Letter to the editor, criticizing John Hospers' view that running for political office as part of the Libertarian Party is "the quickest way of getting libertarian ideas known to millions"

I look forward to the day when the libertarian movement is so vigilant that statements like the following in REASON [February] cannot appear in a respected libertarian publication without immediate and vigorous challenge. The paragraph is in your centerfold, and happens to be authored by Dr. John Hospers ... The "Libertarian" Party ... has only one claim to success in public relations: associating the label "libertarian" with "running for political office"—which many, if not most, libertarians would consider the basest smear ... Perhaps I need look forward to the day no longer; here's the challenge and today's the day.
Related Topics: John Hospers, Libertarianism, Libertarian Party

The introductory paragraph uses material from the Wikipedia article "Samuel Edward Konkin III" as of 7 Jul 2018, which is released under the Creative Commons Attribution-Share-Alike License 3.0.