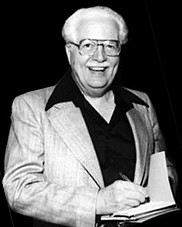 Robert LeFevre (13 October 1911 – 13 May 1986) was an American libertarian businessman, radio personality and primary theorist of autarchism.

Robert LeFevre was a libertarian polemicist and an educator. LeFevre founded and operated the first modern school dedicated to libertarian education, called the Freedom School, later renamed Rampart College. LeFevre, while an anarchist who did not believe in the morality or necessity of any government, rejected the term anarchy because he thought it embraced active attempts to eliminate government, which he thought was as immoral as government itself. He called his antistate philosophy autarchism after the Greek for "self-rule." ... He launched his Freedom School in 1957 in a rural setting ...
Related Topic: Libertarianism

In Madison, ... his new roommate, chemistry Ph.D. candidate and former Ayn Rand devotee Tony Warnock, introduced [Konkin] to the Wisconsin Conservative Club, where he met people who told him the name of the real political philosopher and teacher upon whom Heinlein had based de la Paz – Robert LeFevre ... As Sam put it ..., "... In February of 1970, several activists working for Robert LeFevre organized an even bigger conference in Los Angeles at USC, which included Hess, SDS ex-president Carl Oglesby, and just about every big name in the movement up to that point ..."
Related Topics: Roy Childs, Williamson Evers, Robert A. Heinlein, Samuel Edward Konkin III, Laissez Faire Books, Libertarian Party, Liberty International, Ludwig von Mises, Murray Rothbard, George H. Smith
Meeting Murray Rothbard On the Road to Libertarianism, by Jeff Riggenbach, 4 Jan 2003
Riggenbach recounts his path from advocate of Ayn Rand, to reading Robert LeFevre to reading and eventually meeting Murray Rothbard; reprinted in I Chose Liberty (2010)

I was particularly successful with [finding] the works of Robert LeFevre. I found The Nature of Man and His Government, The Philosophy of Ownership, and perhaps most important of all, several back issues of the Rampart Journal, the quarterly LeFevre had edited in the mid-1960s when he was running Rampart College in Colorado ... Reading Bob LeFevre and attending his lectures (he too now lived in Southern California) had piqued my interest in individualist anarchism ... I read LeFevre's Pine Tree Press edition of Lysander Spooner's No Treason VI.
Related Topics: Libertarianism, Periodicals, Reason, Murray Rothbard
Robert LeFevre, Paying a Debt Backward, by Wendy McElroy, 6 Nov 2014
A tribute to Robert LeFevre, highlighting his solution to ensuring private justice

LeFevre had a unique take on the question 'how can a society best ensure private justice?' ... Lefevre's approach was different and, again, deceptively simple. He spoke in terms of individuals protecting against violence and so preventing crime before it happens. ... Moreover, LeFevre's protection system offered advantages. A major one: After a crime has occurred, it is almost impossible to make the victim whole. ... LeFevre's overwhelming insistence on preventing a crime in the first place is a simple, elegant and real solution. And, yet, it may well be the least discussed.
Related Topics: Robert A. Heinlein, Karl Hess, Murray Rothbard
Rose Wilder Lane (1886–1968), by Cato Institute, Mar 2003
Part of Cato's "Three Women Who Launched a Movement", celebrating during Women's History Month the sixtieth anniversary of the publication of The Discovery of Freedom (as well as Isabel Paterson and Ayn Rand books published in the same year)

In 1958, a man named Robert Le Fevre who had been strongly influenced by Lane's The Discovery of Freedom asked her to come visit his "Freedom School," which he had founded to promote the individualist principles he said Lane had taught him. She would become a regular lecturer there for several years thereafter.
Related Topics: Communism, Roger MacBride, Ayn Rand, Socialism, Social Security Tax, Rose Wilder Lane
The Story of Roy A. Childs Jr. (1949–1992), by Jeff Riggenbach, 21 Jan 2011
Biographical essay; transcript of "The Libertarian Tradition" podcast of 12 Jan 2011

LeFevre had given his Freedom School (established in 1957 ...) a new name by this time. It was now Rampart College, and LeFevre was busily hiring faculty and making plans for the school to become an accredited, degree-granting, four-year libertarian college as soon as all the necessary details were worked out ... within a few months of [Childs] arrival [in 1968], the entire Freedom School enterprise (including Rampart Journal, Pine Tree Press, and Pine Tree Features) collapsed. Robert LeFevre moved what was left of Rampart College (mainly its home study course) to Southern California.
Related Topics: Roy Childs, Laissez Faire Books, Liberty International, Objectivism, Ayn Rand, Murray Rothbard, Joan Kennedy Taylor
Sy Leon, R.I.P., by Butler Shaffer, 11 Sep 2007
Recollections of the life of Seymour (Sy) Leon, who taught at Rampart College with Shaffer, Rampart College and others who taught there, and the libertarian movement of the 1950s/1960s

[Sy Leon] and I were teaching at Robert LeFevre's Rampart College in Colorado, one of a number of organizations devoted to broadening an understanding of individual liberty. LeFevre had been successful in getting men and women in all age groups to pay to spend one to two weeks in Colorado studying the philosophy of freedom ... Others who taught at Rampart at the time included the economist Bill Hutt, historian Jim Martin, and a gangly teenager by the name of Roy Childs. Others who came there to share their ideas included Ludwig von Mises, F.A. Harper, Frank Chodorov, Rose Wilder Lane, Bruno Leoni, Leonard Read, Gordon Tullock, and Milton Friedman.
Related Topics: Libertarianism, Murray Rothbard, Voting
Was Robert A. Heinlein a Libertarian?, by Jeff Riggenbach, 2 Jun 2010
Biographical essay, focused on attempting to answer the title question; transcript of "The Libertarian Tradition" of 18 May 2010

Both in his physical appearance—the wavy white hair, the dimples, the smiling voice—and in his ideas, Professor Bernardo de la Paz bears a striking resemblance to a real-life libertarian who flourished and enjoyed considerable influence within the libertarian movement during the 1950s, '60s, and '70s—Robert LeFevre ... Heinlein was writing The Moon Is a Harsh Mistress during the years when LeFevre was operating his famous Freedom School up the road a few miles in Larkspur and working to transform it into a degree-granting, four-year institution he wanted to call Rampart College ...
Related Topics: Robert A. Heinlein, Libertarianism, The Moon is a Harsh Mistress, Murray Rothbard
The Wisdom of LeFevre, by Lew Rockwell, The Free Market, Jul 2001
Discusses various aspects of LeFevre's thoughts, e.g., the distinction between true and artificial government, patriotism, and includes excerpts from a draft new Declaration of Independence

In 1957, a businessman and radio personality named Robert LeFevre ... founded a very special institution ... In his private studies, he had discovered the libertarian intellectual tradition. He noted the dire need for an institution that would educate people from all walks of life in the philosophy of freedom. He took it upon himself and named it the Freedom School ... He saw his main role as a teacher as dislodging the false conscientiousness that keeps so many from seeing artificial government as a parasite ... He astutely observed that all states are prone to expansion and always at the expense of liberty.
Related Topics: Colorado, United States Declaration of Independence, Government, Mises Institute, The State, Voluntaryism

The Abstract Concept of Human Liberty, The Freeman, Dec 1982
Discusses how people may be interested in other people, in events or in material things but only a few are interested in ideas, and how each group of people tends to view liberty from those perspectives

When it comes to using their brains, people fall into various classifications depending on their respective interests. By far, the majority think and talk about people, themselves and others. The focus may range from behavioral examination all the way to gossip. The topic of humanity ... is fascinating to most of us ... The abstract concept of human liberty is one of the mightiest and most important intellectual attainments of our species. It provides us with a comprehensible, visible star of such celestial magnitude that all who wish can see it ... You can steer your life by it, even if you cannot reach it.
Related Topics: Achievement, Economic Freedom, Entrepreneurship, Free Market, Government, Liberty, Politics, War
How to Become a Teacher [PDF], The Voluntaryist, Feb 1983
Autobiographical summary of the events in LeFevre's life that led to the founding of the Freedom School, including LeFevre's relationship with Baldy Harper and the offer for him to lead the School

If the truth be known, I never intended being a professor, instructor or teacher. My father spoke disparagingly of teachers. He had carved an extraordinary record as a scholar at MacAlister College in St. Paul, winning a Bachelor of Science degree with an "A" average in three years. He was openly disdainful of the role played by instructors and it was easy for me to agree ... That's how I learned. I have no teaching certificate, no license, no government or institutional credentials. Learning to use one's mind as a teacher is like learning to play the violin. Constant practice with the instrument does the job.
Related Topics: Frank Chodorov, Colorado, Communism, Foundation for Economic Education, Government, F. A. Harper, Learning, Los Angeles, Leonard Read, Socialism, Rose Wilder Lane, World War II

Robert LeFevre: Truth is Not a Half-Way Place
by Karl Hess (foreword), Carl Watner, 1988
Partial contents: Born to be Different - Down and Out in L.A. - The San Francisco Group and more Financial Troubles - The Shift from Politics - Freedom School (three chapters) - The Phrontistery to Rampart College - A Man at Peace with Himself

Drawing on great thoughts from all ages—and specifically influenced by Rothbardian political economy—Robert LeFevre asks and answers fundamental questions about the relationship between man, property, society, and the state.

Roy A. Childs, Jr.: A Tribute to Bob LeFevre, by Roy Childs, 1986
Eulogy for LeFevre given at a Free Press Association dinner in New York

The introductory paragraph uses material from the Wikipedia article "Robert LeFevre" as of 15 Jan 2018, which is released under the Creative Commons Attribution-Share-Alike License 3.0.