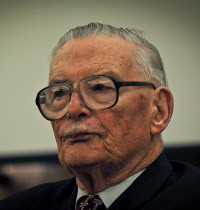 James McGill Buchanan Jr. (3 October 1919 – 9 January 2013) was an American economist known for his work on public choice theory (included in his most famous work, co-authored with Gordon Tullock, The Calculus of Consent, 1962), for which he received the Nobel Memorial Prize in Economic Sciences in 1986. Buchanan's work initiated research on how politicians' and bureaucrats' self-interest, utility maximization and other non-wealth-maximizing considerations affect their decision-making. He was a member of the Board of Advisors of the Independent Institute, a member (and for a time president) of the Mont Pelerin Society, a Distinguished Senior Fellow of the Cato Institute and professor at George Mason University.

James M. Buchanan is one of the originators of public choice theory and among the foremost economists of the 20th century. Together with Gordon Tullock, Buchanan revolutionized the way economists view political economy by introducing motivational symmetry between public and private actors. Before Buchanan's contributions, it was standard practice to view market failures as prima facie evidence of the need for government intervention. Public choice theory forced scholars to confront the fact that government failures may be worse than the market failures the government is introduced to correct.
Related Topics: Government, Politics
James M. Buchanan (1919-2013), The Concise Encyclopedia of Economics
Includes picture and list of selected works

James Buchanan is the cofounder, along with Gordon Tullock, of public choice theory. Buchanan entered the University of Chicago's graduate economics program as a 'libertarian socialist.' After six weeks of taking Frank Knight's course in price theory, recalls Buchanan, he had been converted into a zealous free marketer. Buchanan's next big conversion came while reading an article in German by Swedish economist Knut Wicksell. The obscure 1896 article's message was that only taxes and government spending that are unanimously approved can be justified.

Buchanan has been extraordinarily productive. He wrote over 300 articles and 75 reviews ... He is the author or co-author of 37 books ... The best-known work on public choice economics is The Calculus of Consent: Logical Foundations of Constitutional Democracy (1965), which Buchanan wrote with Tullock when both were at the University of Virginia. If this wasn't really the first book with public choice type of analysis, it did inspire large numbers of economists to pursue public choice and produce perhaps thousands of books and articles over the years.

The Royal Swedish Academy of Sciences has decided to award the1986 Alfred Nobel Memorial Prize in Economic Sciences to Professor James McGill Buchanan, George Mason University, Virginia, USA, for his development of the contractual and constitutional bases for the theory of economic and political decision-making.

Why do good people almost always turn into scoundrels after they become part of the government? As Buchanan (b. 1919) explained, it's simply because they're pursuing their own interests. Along with Gordon Tullock, Buchanan helped pioneer 'public choice' economics which involves analyzing how government officials make their choices and pursue their self-interest, generating pressure for bigger budgets, higher taxes, more regulations and overall more power. Buchanan has explained how various constitutional arrangements affect the incentives officials face and the decisions they make.
Economics - Faculty and Staff: James M Buchanan
Page for Emeritus Faculty at George Mason University; short profile and photograph, includes links to Sep 1995 interview with The Region and his Collected Works

James M. Buchanan, Nobel Prize winner in Economic Science, 1986, is currently Advisory General Director of the Center for Study of Public Choice, Distinguished Professor Emeritus of Economics, Board of Visitors, President, and Faculty George Mason University 15 Oct 1999 ... Professor Buchanan ... taught at the University of Tennessee, Florida State University, University of Virginia, UCLA, and Virginia Polytechnic Institute and State University where he established the Center for Study of Public Choice. He moved from the Center to George Mason University in 1983.
The James Buchanan Center for Political Economy
Short profile, includes photograph, and links to his working papers and vita

Economist James M. Buchanan, winner of the 1986 Nobel Prize in Economic Science, is the Center's advisory general director. He is best known for developing the 'public choice theory' of economics, which changed the way economists analyze economic and political decision making. Professor Buchanan's work opened the door for the examination of how politicians' self-interest and non-economic forces affect government economic policy. ... After graduating from the University of Chicago with a Ph.D. in 1948, he held teaching positions at the University of Virginia, UCLA, and the Virginia Polytechnic Institute.

James Buchanan's Subjectivist Economics, by Sheldon Richman, Future of Freedom, Apr 2013
Reviews Buchanan's writings in What Should Economists Do? (1979), a collection of several of his essays

James Buchanan, the Nobel Laurate ..., was well known for his pioneering work in Public Choice (the application of economic principles to politics), constitutional economics (as a device for limiting government power), and many other key subjects in political economy ... Less well known ... is his thinking on the nature of economics itself. Considering his deep subjectivism and methodological individualism, Buchanan may be seen at least as a fellow traveler of the Austrian school ..., and I commend his writings ... to anyone interested in the tradition of Mises, Hayek, Rothbard, and Kirzner.
Related Topics: Economics, Entrepreneurship, Free Market, Liberty
James M. Buchanan and the Rebirth of Political Economy, by Peter Boettke, Economics and its Discontents, 1998
Examines Buchanan's contributions in bursting the "romantic vision of political science," advancing subjectivism as a challenge to modern economics formalism and re-integrating moral philosophy into economics

Buchanan attended the University of Chicago, taught during the formative period of his career at the University of Virginia, published articles in the American Economic Review and the Journal of Political Economy and books with the University of Chicago Press and Cambridge University Press, was named the Distinguished Fellow of the American Economic Association, and received National Science Foundation Grants as well as lucrative private foundation grants ... Buchanan has dissented from the mainstream trend in modern economic thinking throughout his career.
Related Topics: Anarchism, Economics, Free Market, Frank Knight, Politics, The State
William Harold Hutt (1899-1988): A Biographical Essay from an Austrian Perspective, by John B. Egger
Biographical and bibliographical essay

Economists and the Public was published in the same year as Keynes's General Theory, and many economists have wished that Hutt's thoughtful work had received the greater attention. James Buchanan, a Nobel Laureate for his own work in public choice who brought Hutt to the University of Virginia after Hutt's retirement in 1965, called it "one of Hutt's best works" ... [Hutt's] 1943 book Plan for Reconstruction has been lauded by James Buchanan ...
Related Topics: Economic Resources, Austrian Economics, William Harold Hutt, Labor, Ludwig von Mises, Mont Pelerin Society, Jean-Baptiste Say

Interview with James Buchanan, The Region, Sep 1995
Topics include The Calculus of Consent, public choice theory, monetary policy and the Federal Reserve

Region: Most people who know your work consider The Calculus of Consent as your most important book. What was the insight that brought you to write The Calculus of Consent?
Buchanan: I think that's hard to say. In my own case it was a general sense that people who were supposed to know didn't really know what democracy was about ...
Region: You had once written about yourself, "I hope that I seem what I think I am: a constitutional political economist who shares an appreciation for the Judeo-Christian heritage that produced the values of Western culture and institutions of civil order ..."
Related Topics: United States Constitution, Democracy, Economists, Federal Reserve System, Italy, Politicians, Politics, Taxation, Gordon Tullock, United States, Virginia

The introductory paragraph uses material from the Wikipedia article "James M. Buchanan" as of 5 Aug 2018, which is released under the Creative Commons Attribution-Share-Alike License 3.0.