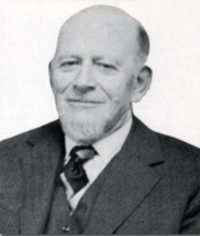 Ludwig Maurits Lachmann (1 February 1906 – 17 December 1990) was a German economist who became a member of and important contributor to the Austrian School of economics.

Ludwig M. Lachmann - Online Library of Liberty
Includes picture, short profile and links to some of Lachmann's works and to a selected quotation

Lachmann was a German born member of the Austrian school of economics founded by Carl Menger and Boehm-Bawerk. He studied at the London School of Economics in the 1930s, taught at the University of Wiwatersrand in South Africa and wrote seminal material on Austrian capital theory.

Biography of Ludwig Lachmann (1906-1990): Life and Work, by Peter Lewin, 1 Aug 2007
Biographical and bibliographical essay, examining in particular his approach as a teacher and his contributions to the theory of capital and subjectivism

Lachmann received his graduate education ... at the University of Berlin between 1924 and 1933 ... He apparently first became interested in Austrian economics ... during a summer that he spent at the University of Zurich in 1926. In 1933 he ... settled in England, where he spent some considerable time at the London School of Economics. In 1948 he [resettled] at the University of the Witwatersrand in Johannesburg, South Africa, where he remained for the rest of his life. After retiring, he spent a semester of each year teaching at New York University in their Austrian economics program ...
Related Topics: Eugen von Böhm-Bawerk, Friedrich Hayek
A Conversation with Leland B. Yeager, by Leland B. Yeager, Austrian Economics Newsletter, 1991
Topics discussed include utilitarianism, rights theory, ethics and economics, mathematics and economics, methodological taboos, hermeneutics, Austrian economics, socialism and Eastern Europe

AEN: And what of your view toward Shackle and Lachmann, the radical subjectivists?
YEAGER: They advanced of a kind of subjectivism I reject. In short, they advanced nihilism. I know they don't call it that, but that is the way it comes across to me. If the extreme subjectivists like Lachmann and Shackle take themselves seriously--that we cannot know anything about the future, that expectations are subjective ...--why would they pose as professors of economics? Why do they set out to do anything? Lachmann was a dear man, but his entire doctrine was negative and trying to pull down economic rationality.
Related Topics: Austrian Economics, Ethics, Rights
How I Became a Libertarian and an Austrian Economist, by Richard Ebeling, 2 May 2016
Autobiographical essay highlighting the people and events who influenced Ebeling in his path to libertarianism and Austrian economics

Ludwig M. Lachmann, who had studied with Hayek at the London School of Economics after having left Germany in 1933, had made major contributions to Austrian capital theory and a dynamic conception of the competitive market process ... [H]e came to NYU as a visiting professor on a regular basis. His graduate seminar was a stimulating experience in which after delivering a series of lectures himself ..., the rest of the term was taken up with the graduate students delivering papers and having them subjected to challenging criticisms from both Lachmann and the other participants.
Related Topics: Economics, Austrian Economics, Bettina Bien Greaves, Friedrich Hayek, Institute for Humane Studies, Israel Kirzner, Libertarianism, Man, Economy, and State, Ludwig von Mises, Ayn Rand, Murray N. Rothbard
The Story of a Movement, by Peter Boettke, The Freeman, May 1995
Reflects on the growth of Austrian economics from a set of lectures in South Royalton, Vermont in June 1974 to the current spread through several scholars and institutions, and discusses a Karen Vaughn book on the school and its debates

Ludwig Lachmann's great contribution to modern Austrian economics was to 'shake the tree' so to speak. His willingness to push for the consistent development of subjectivist ideas–wherever they might lead–forced the younger generation of Austrian economists to think hard for themselves about the meaning of market processes and the relationship of Austrian economics to neoclassical economics. An unintended consequence of this pushing by Lachmann was the continued refinement of the argument by Lachmann's colleague and main opponent on several issues of basic economic theory, Israel Kirzner.
Related Topics: Austrian Economics, Milton Friedman, Ludwig von Mises, Murray N. Rothbard

KIRZNER: Lachmann played a vital role in the revival of Austrian economics. He was a gadfly. He kept us honest. He had a personal link with Mises and Hayek that nobody else had. He was a bridge between the generations. He had deep respect for [them], even where he disagreed with them ... Doctrinally, Lachmann was much closer to the extreme Shackelian position on choice, uncertainty, and time, and went much further than I am willing to go ... He was careful to keep a lot of his ideas to himself. But I believe he was trying to steer Austrian economics in a more subjectivist direction.
Related Topics: Capital Goods, Economics, Austrian Economics, Entrepreneurship, Ethics, Friedrich Hayek, Ludwig von Mises, Monopoly, Murray N. Rothbard, Joseph Schumpeter, Technology
Radical Economics: An Interview with Walter Block, by Walter Block, Austrian Economics Newsletter, 1999
Discusses topics such as the effect of Rothbard's death, Block's own intellectual development, the legality of blackmail and barriers to Austrians in academia

Block: ... I remember Walter Grinder and I pestering Kirzner to be more open with his views. In exasperation, he finally asked what we wanted him to do. Our answer was fateful. We suggested that he bring Ludwig Lachmann from South Africa to be a visiting professor. Lachmann had written a good book on capital theory, and I figured he would make a good teacher. But it turned out that Lachmann had some odd views. He was good on capital, but he was a disciple of G.L.S. Shackle, and that basically meant rejecting the idea of economic law. Increasingly, to Lachmann, Austrianism was another word for methodological nihilism.
Related Topics: Anarcho-Capitalism, Government, Man, Economy, and State, Minimum Wage Laws, Ludwig von Mises, Praxeology, Private Roads, Property Rights, Murray N. Rothbard, The State

The introductory paragraph uses material from the Wikipedia article "Ludwig Lachmann" as of 11 May 2018, which is released under the Creative Commons Attribution-Share-Alike License 3.0.