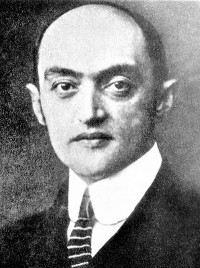 Joseph Alois Schumpeter (8 February 1883 – 8 January 1950) was an Austrian political economist. Born in Austria, he briefly served as Finance Minister of Austria in 1919. In 1932, he became a professor at Harvard University where he remained until the end of his career, eventually obtaining U.S. citizenship. One of the most influential economists of the 20th century, Schumpeter popularized the term "creative destruction" in economics.

A giant among 20th-century economists, Joseph Schumpeter is best known for his path-breaking work on capitalism, innovation, entrepreneurship, and growth. He coined the phrase creative destruction to describe capitalistic growth as the ceaseless killing off of old ways of doing business by the new. He is not often thought of as a libertarian. Nevertheless, with his love of free markets; his stress on human freedom ...; his belief in capitalism ... ; his focus on the lone-wolf entrepreneur ...; his public choice views ...; and his hatred of war, Schumpeter has much in common with libertarians.
Related Topics: Capitalism, Democracy, Entrepreneurship, Monopoly, Socialism

"Turgot was much too able a man to write anything insignificant," observed intellectual historian Joseph A. Schumpeter. Commenting on [Turgot's] most important work, a slim volume, Schumpeter noted that "it contains a theory of barter, price, and money that, so far as it goes, is almost faultless ... comprehensive vision of all the essential facts and their interrelations plus excellence of formulation." ... Turgot had befriended Jacques Claude Marie Vincent, Marquis de Gournay (1712-1759), whom ... Schumpeter called "one of the greatest teachers of economics who ever lived."
Related Topics: John Adams, Bureaucracy, Economic Barriers, France, Free trade, Gold Standard, Government, Money, François Quesnay, Freedom of Religion, Slavery, Adam Smith, Freedom of Speech, Taxation, Alexis de Tocqueville, Anne Robert Jacques Turgot

The Brilliance of Turgot, by Murray N. Rothbard, Apr 1986
Biography and review of Turgot's major writings; introduction to The Turgot Collection (2011), edited by David Gordon

[I]t is heart-warming to see Schumpeter's appreciative summation of Turgot's great contributions to economics. Concentrating almost exclusively on Turgot's "Reflections," Schumpeter declares that his theory of price formation is "almost faultless, and, barring explicit formulation of the marginal principle, within measurable distance of that of Böhm-Bawerk." ... Turgot's interest theory is "not only by far the greatest performance ... the eighteenth century produced but it clearly foreshadowed much of the best thought of the last decades of the nineteenth."
Related Topics: Eugen von Böhm-Bawerk, Capital Goods, Economic Resources, Entrepreneurship, Free Market, Free trade, Government, Labor, Money, Taxation, Anne Robert Jacques Turgot
Capitalism and the Intellectuals [PDF], by Robert Nisbet, Regulation, Dec 1977
Review of Paul Johnson's The Enemies of Society (1977); reprinted from The Wall Street Journal

As for why the system thus produced [by capitalism] should have become the object of such sustained animosity, this is the same question ... that preoccupied the economist Joseph Schumpeter a half-century ago; and Johnson's own response to it is in the spirit of Schumpeter. Schumpeter wrote—and Mr. Johnson argues—that the demise of capitalism would come not from any revolt by the allegedly exploited working classes but from the erosion of "precapitalist strata" such as family and social class and—more important, perhaps—from the "alienation" of the intellectual class that capitalism had created.
Related Topics: Capitalism, Prohibition, The State
A Critique of Monetarist and Austrian Doctrines on the Utility and Value of Money, by Richard Timberlake, The Review of Austrian Economics, 1987
Examines the differences and similarities between the writings of monetarists such as Irving Fisher and Austrian economists such as Ludwig von Mises on the topic of money, contrasting them with the meager explanations of John Maynard Keynes

Schumpeter correctly interpreted the Austrian view to mean that the exchange value of money—what it will buy—must be known before the individual can assign any utility to a unit of money: 'It is therefore impossible to do in the case of money what can be done in every other case, namely, to deduce its exchange value from ... schedules of marginal utility: to attempt to do so seems to spell circular reasoning' ... Schumpeter hazards the guess that Fisher's vested interest in a 'piece of social engineering—the compensated-dollar plan—pushed aside all other considerations'.
Related Topics: Austrian Economics, William Harold Hutt, Carl Menger, Money, Prices, Murray N. Rothbard
Eugen von Böhm-Bawerk: A Sesquicentennial Appreciation, by Richard Ebeling, The Freeman, Feb 2001
Broad biographical essay, including Böhm-Bawerk relationships with Menger, Mises and Schumpeter, and his two major works

Another of Böhm-Bawerk's students, Joseph A. Schumpeter, spoke in the same glowing terms of his teacher, saying, "he was not only one of the most brilliant figures in the scientific life of his time, but also an example of that rarest of statesmen, a great minister of finance . ... As a public servant, he stood up to the most difficult and thankless task of politics, the task of defending sound financial principles." ... Joseph A. Schumpeter, "Eugen von Böhm-Bawerk, 1851-1914," reprinted in Schumpeter, Ten Great Economists: From Marx to Keynes ... p. 145.
Related Topics: Austria, Eugen von Böhm-Bawerk, Capital Goods, Austrian Economics, Carl Menger, Minimum Wage Laws, Ludwig von Mises, Prices, Wages
Non-Marxist Theories of Imperialism, by Alan Fairgate, Reason, Feb 1976
Examines writings of critics of imperialism that are not based on Marxist analysis

Stromberg's analysis is strongly influenced by Joseph Schumpeter, who sought to formulate a non-Marxist theory of imperialism in his essay 'Imperialism' ... Schumpeter focused especially on the role of protectionism in facilitating the formation of cartels and trusts in the domestic economy and on the resulting distortions. His analysis stressed the intimate ties between bankers and the cartel organizers and noted that the two may often be identical. ... Schumpeter repeatedly stressed the 'atavistic' nature of imperialism, and argued that a capitalist system is inherently anti-imperialist ...
Related Topics: Latin America, Banking, John Bright, Richard Cobden, John T. Flynn, Foreign Entanglements, Garet Garrett, Imperialism, Leonard Liggio, Militarism, George Orwell, Murray N. Rothbard, Jean-Baptiste Say, Adam Smith, Joseph R. Stromberg, William Graham Sumner
The Reagan Record On Trade: Rhetoric Vs. Reality [PDF], by Sheldon Richman, Policy Analysis, 30 May 1988
Analysis of Reagan's stance on free trade and protectionism, contrasting what he and those in his administration said with a lengthy list of actual quotas, tariffs and trade negotiation results

The error many people make is looking at international trade out of its proper context. As economist Joseph Schumpeter warned, "Free-trade policy means much more than a particular way of dealing with questions of foreign trade ... free trade is but an element of a comprehensive system of economic policy and should never be discussed in isolation ... The really important point to make is that this system of economic policy conditions, and is conditioned by ... a general political and moral attitude or vision that asserts itself in all departments of national and international life."
Related Topics: Frédéric Bastiat, Canada, Free trade, Milton Friedman, Japan, Ronald Reagan
Why Intellectuals Still Support Socialism, by Peter G. Klein, Mises Daily, 15 Nov 2006
Examines the underlying reasons why so many academics support socialist ideas, not reflecting those of the general population, and how this changed from the mid-20th century

As Joseph Schumpeter explained in Capitalism, Socialism, and Democracy, it is "the absence of direct responsibility for practical affairs" that distinguishes the academic intellectual from others "who wield the power of the spoken and the written word." This ... leads to ... absence of first-hand knowledge of practical affairs. The critical attitude of the intellectual arises, says Schumpeter, "no less from the intellectual's situation as an onlooker—in most cases also as an outsider—than from the fact that his main chance of asserting himself lies in his actual or potential nuisance value."
Related Topics: Economics, Economists, F. A. Hayek, Murray N. Rothbard, Socialism, Technology, World War II

KIRZNER: ... There was personal tension between Mises and Schumpeter, and most of what we would currently identify as key Austrian features were not accepted by Schumpeter. Walrasianism did dominate his thinking. Yet I have defended Schumpeter as an Austrian in a very special way. He never really bought into the neoclassical view of "equilibrium always." Certainly his emphasis on the entrepreneur is consistent with that. He never forgot the lessons he learned from Austrians, even if he tried to forget them. The Austrian revival owes something to Schumpeter.
Related Topics: Capital Goods, Economics, Austrian Economics, Entrepreneurship, Ethics, F. A. Hayek, Ludwig Lachmann, Ludwig von Mises, Monopoly, Murray N. Rothbard, Technology

The introductory paragraph uses material from the Wikipedia article "Joseph Schumpeter" as of 24 Jul 2018, which is released under the Creative Commons Attribution-Share-Alike License 3.0.