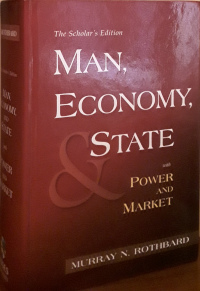 Man, Economy, and State: A Treatise on Economic Principles is an economics treatise authored by Murray Rothbard. It was commissioned by the William Volker Fund and was published in 1962 in two volumes by D. Van Nostrand Company. It presents economics from an Austrian School perspective.

Now [Mises'] former student, Murray Rothbard, has written Man, Economy, and State, a comprehensive and systematic treatise on the principles of economics, which both expands and clarifies the Misesian structure ... Dr. Rothbard extends his analysis to the workings of a society based on voluntary contractual agreements and the unhampered or free market. He describes the contractual society of the market as a genuinely cooperative society where "each person specializes in the task for which he is best fitted, and each serves his fellow men in order to serve himself in exchange."
Related Topics: Banking, Economics, Free Market, Monopoly, Property Rights
Foreword, by Roy Childs, Egalitarianism as a Revolt Against Nature and Other Essays, Jan 1974
Foreword to the 1974 edition, compares Rothbard to Karl Marx as a "system builder" of anarchist thought; reprinted in second edition (2000) and as "The System Builder" on 7 Nov 2008 at Mises.org

[T]he most significant things to be said about Rothbard are intellectual. For in Rothbard we have one of the only explicit system builders writing today. He has already published three volumes of a treatise on economic principles, namely the two volumes of his Man, Economy, and State and its sequel, Power and Market. Numerous works on economic history have been published ...
Related Topics: Anarchism, For a New Liberty, Libertarianism, Murray Rothbard
How I Became a Libertarian and an Austrian Economist, by Richard Ebeling, 2 May 2016
Autobiographical essay highlighting the people and events who influenced Ebeling in his path to libertarianism and Austrian economics

Murray Rothbard's influence was different [from Kirzner's]. I learned a great deal of clear and logical thinking from his writings on Austrian Economics, especially [Rothbard's] monumental two-volume treatise, Man, Economy and State, which systematically stated, refined, and advanced the entire corpus of Austrian theory from the conception of human action to the nature and effects of government intervention in the market economy.
Related Topics: Economics, Austrian Economics, Bettina Bien Greaves, Friedrich Hayek, Institute for Humane Studies, Israel Kirzner, Ludwig Lachmann, Libertarianism, Ludwig von Mises, Ayn Rand, Murray Rothbard
The life and times of Murray N. Rothbard, by Jim Powell
Full title: The life and times of Murray N. Rothbard, who showed why private individuals can do just about everything that needs to be done
Lengthy biographical essay

Rothbard's project expanded until it became a 1,900-page manuscript tentatively called Man, the Economy and the State. The Volker Fund grant ran out on June 30, 1956, and he finished up the manuscript in 1957. He sent it to Devin-Adair (New York) and Caxton Printers (Caldwell, Idaho) which had issued libertarian books, but they declined because of the bulk ... It was sent to National Review's Frank Meyer who recommended that the last 700 pages be cut. Rothbard reluctantly accepted such cuts as the cost for getting the rest of the manuscript published, and he wrote a new ending. The book, which filled two volumes, appeared in 1962.
Related Topics: American Revolutionary War, analysis, Walter Block, Compulsory Education, John T. Flynn, Foundation for Economic Education, Milton Friedman, Government, F. A. Harper, Karl Hess, Human Action, Manny Klausner, Libertarianism, Mises Institute, Ludwig von Mises, Money, Monopoly, Property Rights, Ayn Rand, Lew Rockwell, Murray Rothbard, Mark Skousen, The State, Taxation, Vietnam War
Murray N. Rothbard: Mr. Libertarian, by Wendy McElroy, 6 Jul 2000
A tribute to Rothbard as a "system builder," an integrator of multiple disciplines into a "philosophy of freedom"; examines several of Rothbard's essays and books

In Man, Economy, and State ..., Rothbard embodied and extended Mises' broad approach to economics. Llewellyn Rockwell ... wrote, "Beginning with the philosophical foundation, Rothbard built an edifice of economic theory and an unassailable case for the market ... The book treated economics as a humane science, not as a branch of physics." He concluded, "... Rothbard's great work, was the key to the resurgence of Austrian economics after Mises's death." It is difficult to overstate the impact of [this book] in certain circles of scholarship. Its influence was not limited to students of economics.
Related Topics: Roy Childs, Economics, Ethics, Free Market, Libertarianism, Liberty, Ludwig von Mises, Property Rights, Murray Rothbard, The State, War
On Autobiography, by Walter Block, 4 Dec 2002
Autobiographical, recounts how Block met Ayn Rand and later Murray Rothbard and how he progressed from libertarian minarchism to anarcho-capitalism; and pleads other libertarians to write "how they first were introduced to this philosophy"

Murray was always exceedingly kind to me, tolerant of my foibles, endlessly patient. By now I was reading Man, Economy and State. I had this weird reaction to the experience of reading the book by day, and seeing the author, regularly, at night. On the one hand, MES was wonderfully written, excruciatingly brilliant. To me, the economics of it was as beautiful as Bach, Mozart and Handel, my three favorite composers, all rolled into one (and this is before I became an Austrian). To compare this to neoclassical economics was to contrast a plough horse with a thoroughbred.
Related Topics: Anarcho-Capitalism, Gary Becker, Nathaniel Branden, Praxeology, Ayn Rand, Murray Rothbard
Reading the Literature of Liberty, by Roy A. Childs, Jr., May 1987
Childs' selection of "great books", including works by Hazlitt, Bastiat, Rose Wilder Lane, Nock, Ayn Rand, Friedman, Hayek, Rothbard, Mises and Nozick

Thousands of people have found [For a New Liberty] an excellent overview of libertarianism. If you want food for thought, here is a gourmet's delight! But don't neglect the works that really made Rothbard's reputation as a young man: his treatise Man, Economy, and State is a magnificent contribution both to economics and to political theory, while its sequel, Power and Market launched a full-scale critique of state intervention in the economy.
Related Topics: Frédéric Bastiat, For a New Liberty, Milton Friedman, Friedrich Hayek, Henry Hazlitt, The Law, Libertarianism, Ludwig von Mises, Albert Jay Nock, Ayn Rand, The Road to Serfdom, Murray Rothbard
Read Rothbard, by Lew Rockwell, 29 Jul 2013
Bibliographical review of 11 of Rothbard's major works, including suggested reading order, plus three additional titles

This is Rothbard’s magnum opus. It takes you from the most basic principles, involving an economy with only a single person, all the way through production, consumption, monopoly, interest rates, money, and much more. It is a systematic treatise on economics from the Austrian perspective. This is a long book. It’s even longer if you read it the way it was intended to be read: with Power and Market. Power and Market originally formed the last part of Man, Economy and State, but the publisher feared it was too radical and urged that it be published as a separate work.
Related Topic: Murray Rothbard
Rothbard, Murray (1926-1995), by Brian Doherty, The Encyclopedia of Libertarianism, 15 Aug 2008
Biographical and bibliographical essay

The [Volker Fund] supported Rothbard's writing of his major economic work, Man, Economy, and State, which he published in 1962. This book was a full exposition of the entire body of economic thinking from first principles ... The book is in the Misesian tradition, building up economics as a deductive science starting from the fact that men act using scarce means to achieve subjectively valued ends. Rothbard's 1970 book, Power and Market, which was originally intended as the final segment of Man, Economy, and State, extended his analysis ... to lay bare the effects of state interference in the workings of the market.
Related Topics: Murray Rothbard, Circle Bastiat, Central Banking, For a New Liberty, The Libertarian Forum, Libertarianism, Libertarian Party, Mises Institute

Man, Economy, and State ... is a light bulb of a book that keeps the reader clicking with insights. I am jealous of anyone who reads this book for the first time because it is a remarkable adventure that cannot quite be duplicated afterward. ... When I opened [it], I was still an advocate of limited government; when I closed it, I was an individualist anarchist. ... Readers are taken at a dead trot through the key economic issues that still define our society: monetary theory, antitrust, labor, the lie that is government statistics, taxation, public goods, and the welfare scam in its various manifestations.
Related Topics: Human Action, Ludwig von Mises, Murray Rothbard

Radical Economics: An Interview with Walter Block, by Walter Block, Austrian Economics Newsletter, 1999
Discusses topics such as the effect of Rothbard's death, Block's own intellectual development, the legality of blackmail and barriers to Austrians in academia

Block: Actually, I agree with Joseph Salerno that the revival must be dated ten years earlier, to 1962 when Rothbard's Man, Economy, and State appeared. It was the first systematic presentation of Austrian economics since Human Action in 1949, and the most magnificent economic treatise to ever appear, so far as I'm concerned. Without Rothbard's book, I seriously doubt that the Austrian School could have made any kind of revival ... [I]t was Man, Economy, and State that galvanized a generation of intellectuals to go forward with a post-Mises Austrian School.
Related Topics: Anarcho-Capitalism, Government, Ludwig Lachmann, Minimum Wage Laws, Ludwig von Mises, Praxeology, Private Roads, Property Rights, Murray Rothbard, The State