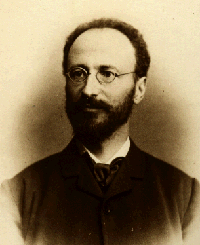 Eugen Böhm Ritter von Bawerk (born Eugen Böhm, 12 February 1851 – 27 August 1914) was an Austrian economist who made important contributions to the development of the Austrian School of economics.

Eugen von Böhm-Bawerk was a professor of economics at the Universities of Innsbruck and Vienna, a finance minister of Austria for many years, a major contributor to the 'Austrian School' of economic thought, and an important critic of Marxism. Building on the work of Carl Menger, he developed a theory of capital and interest centered on 'the relation between present and future in economic life.' His analysis, in turn, provided the starting point for the theory of business cycles developed by his student Ludwig von Mises and by Friedrich A. Hayek.
Related Topic: Capitalism
Eugen von Böhm-Bawerk (1851-1914), The Concise Encyclopedia of Economics
Includes picture and list of selected works

Eugen von Böhm-Bawerk was one of the leading members of the Austrian school of economics. ... Böhm-Bawerk's work became so well known that before World War I, his Marxist contemporaries regarded the Austrians as their typical bourgeois, intellectual enemies. His theories of interest and capital were catalysts in the development of economics ... Böhm-Bawerk gave three reasons why interest rates are positive. First, people's marginal utility of income will fall over time because they expect higher income in the future. Second, for psychological reasons the marginal utility of a good declines with time.

The great Austrian economist Böhm-Bawerk (1851-1914) extended the free market theories of his teacher Carl Menger. Böhm-Bawerk showed that contrary to Karl Marx, who claimed that capital markets exploited workers, capital is essential for economic growth, and interest performs vital functions. Böhm-Bawerk's best-known work was Capital and Interest (1884). Other famous works include: The Exploitation Theory of Socialism-Communism and Value and Price. ... Böhm-Bawerk's most important student at the University of Vienna was Ludwig von Mises.

Adam Smith and the Invisible Hand, by Edmund A. Opitz, The Freeman, Jun 1976
Explains mercantilism, the rationales for political power, government's proper role, Smith's "invisible hand" metaphor, his concept of "equality, liberty and justice" and how a free society allocates economic goods; from a lecture given 17 Feb 1976

The Left ... use Karl Marx's exploitation theory which alleges that the man who works for wages produces, over and above his wage, a "surplus value" which is garnisheed by his employer ... This naive and vicious notion was demolished even while Marx still lived, by the economist, Böhm-Bawerk—founder of the Austrian School. Böhm-Bawerk did it again in a second book, in 1896, with the result that the exploitation theory is not now promoted even by Communist theoreticians.
Related Topics: Thirteen Colonies, Government, Limited Government, Rule of Law, Political philosophy, Adam Smith, Society, Freedom of Speech
Biography of Ludwig Lachmann (1906-1990): Life and Work, by Peter Lewin, 1 Aug 2007
Biographical and bibliographical essay, examining in particular his approach as a teacher and his contributions to the theory of capital and subjectivism

Carl Menger's illustrious disciple, Eugene von Böhm-Bawerk, ... ended up writing a three volume work over a period of some thirty years. ... Following Menger's lead Böhm-Bawerk was one of the first theorists to carefully analyze the role of time in production. Capitalistic economies use capitalistic methods of production, what Böhm-Bawerk referred to as 'roundabout' methods of production. ... Böhm-Bawerk brilliantly analyzed and illustrated the importance of understanding that capitalist economies are characterized by a time structure.
Related Topics: Friedrich Hayek, Ludwig Lachmann
The Brilliance of Turgot, by Murray Rothbard, 1986
Biography and review of Turgot's major writings; introduction to The Turgot Collection (2011), edited by David Gordon

One of the striking examples of injustice in the historiography of economic thought is the treatment accorded to Turgot's brilliant analysis of capital and interest by the great founder of Austrian capital-and-interest theory, Eugen von Böhm-Bawerk ... Unfortunately, ... [he] brusquely dismissed the Frenchman as a mere physiocratic land-productivity theorist. This unfairness to Turgot is all the more heightened by recent information that Böhm-Bawerk, in his first evaluation of Turgot's theory of interest in a still-unpublished seminar paper in 1876, reveals the enormous influence of Turgot's views on his later developed thought.
Related Topics: Capital Goods, Economic Resources, Entrepreneurship, Free Market, Free Trade, Government, Labor, Money, Joseph Schumpeter, Taxation, Anne Robert Jacques Turgot
Editorial: Turgot and the Battle Against Physiocracy, by Leonard Liggio, Literature of Liberty, 1979
Editorial essay for volume II, number 1; discusses those who influenced Turgot and those influenced by him

Eugen von Böhm-Bawerk was in the right place at the right time to contribute importantly to the development of Austrian economics. Studying at the University of Vienna, he was twenty years old when Carl Menger's Principles of Economics appeared in print in 1871. His formal university training was in law (and thus he was not actually a student of Menger's), but after completing his doctorate in law in 1875, he began preparing himself both at home and abroad to teach economics in his native Austria. In the judgment of Schumpeter ..., Böhm-Bawerk 'was so completely the enthusiastic disciple of Menger that it is hardly necessary to look for other influences.'
Related Topics: Austria, Capitalism, Ludwig von Mises
Eugen von Böhm-Bawerk: A Sesquicentennial Appreciation, by Richard Ebeling, The Freeman, Feb 2001
Broad biographical essay, including Böhm-Bawerk relationships with Menger, Mises and Schumpeter, and his two major works

Eugen von Böhm-Bawerk was born on February 12, 1851 in Brno, capital of the Austrian province of Moravia ... He died on August 27, 1914, at the age of 63, just as the First World War was beginning ... in 1880 ... Böhm-Bawerk was appointed a professor at the University of Innsbruck ... he wrote the two books that were to establish his reputation as one of the leading economists of his time ... One of Böhm-Bawerk’s most important applications of his theory was the refutation of the Marxian exploitation theory that employers make profits by depriving workers of the full value of what their labor produces.
Related Topics: Austria, Capital Goods, Austrian Economics, Carl Menger, Minimum Wage Laws, Ludwig von Mises, Prices, Joseph Schumpeter, Wages

The person who most directly influenced Mises was the economist Eugen von Bohm-Bawerk. Born in Brunn, Austria, February 12, 1851, he studied law at the University of Vienna. Political science, at Heidelberg, Leipzig and Jena. He was named professor of economics at the University of Innsbruck, 1881. During the eight years he taught there, Bohm-Bawerk became the greatest champion of Menger's ideas, and he wrote his masterwork, ... [Capital and Interest] which was published in 1884. Economist Joseph A. Schumpeter called Bohm-Bawerk "one of the great architects of economic science."
Related Topics: Austria, Bureaucracy, Central Banking, Foundation for Economic Education, Gold Standard, Henry Hazlitt, Carl Menger, Ludwig von Mises, Money, Mont Pelerin Society, Ayn Rand, Socialism, War
The Undiscountable Professor Kirzner, by Roger W. Garrison, The Freeman, Aug 1997
Review of Kirzner's 1996 Essays on Capital and Interest, a collection of three previously published essays

Eugen von Böhm-Bawerk, whose name has come to be virtually synonymous with roundaboutness (of capital-using production processes), penned the original Austrian perspective on capital and interest. He wrote three volumes (History and Critique, Positive Theory, and Further Essays) over a span of a quarter of a century (1884-1909). In 1959 the 1,200-plus pages of Capital and Interest were translated into English ... Ludwig von Mises reviewed the new translation ... Mises went so far as to suggest ... that no citizen who takes his civic duties seriously should exercise his right to vote until he has read Böhm-Bawerk!
Related Topics: Austrian Economics, Entrepreneurship, Friedrich Hayek, Israel Kirzner, Ludwig von Mises

The Austrian Economists, The Annals of the American Academy of Political and Social Science, 1891
Explains some of the major tenets of the Austrian school -just two decades after publication of its seminal treatise, contrasting them with the views of classical economics and the historical school; paper solicited by the editors of the magazine

The Editors ... have requested from my pen an account of the work of that group of economists which is popularly called the Austrian School. Since I am myself a member of the group, possibly I shall prove to be no impartial expositor. I will, nevertheless, comply ... as well as I can ... Can it be that the tendency which possesses so great a power of attraction is nothing but error? Does it not in reality spring from a need of our science, and supply a need which has long been repressed by one-sided methods, but which must eventually make itself felt—the need of real scientific depth?
Related Topics: Economic Resources, Economics, Austrian Economics, Prices
The Historical vs. the Deductive Method in Political Economy, by Eugen von Böhm-Bawerk, Henrietta Leonard (translator), The Annals of the American Academy of Political and Social Science, 1890
Contrasts the empirical and statistical approach of the German Historical school of economics with the abstract-deductive approach of the then nascent Austrian school

If now we review the grounds upon which stand the objections of the historical school to the 'abstract-deductive' method and I use this name because it is convenient as a name, not because I am entirely satisfied with it ... it is sought from the peculiarly complex nature of social phenomena to deduce that the method of investigation in question is not adequate ... I would point out the curious fact that though the historical school looks so contemptuously on deduction, yet to establish the proposition that abstract-deductive reasoning is not applicable to political economy, they make a brave use of abstract deductions.
Related Topic: Prices

Capital and Interest, 1884
3 volumes: History and Critique of Interest Theories, Positive Theory of Capital, and Further Essays on Capital Interest. Electronic text based on 1890 translation, available at The Library of Economics and Liberty.
Related Topic: Capital Goods
The Exploitation Theory of Socialism-Communism: The Idea That All Unearned Income (Rent, Interest and Profit) Involves Economic Injustice, 1975
Extract from Volume I, Chapter XII, of Capital and Interest; partial contents: Historical Survey of Exploitation Theory - His General and Astounding Error - Marxian Doctrine as Interpreted by His Successors
Related Topic: Communism
Karl Marx and the Close of His System, 1896
Contents: The Theory of Value and Surplus Value - The Theory of the Average Rate of Profit and of the Price of Production - The Question of the Contradiction - The Error in the Marxian System — Its Origin and Ramifications - Werner Sombart's Apology
Related Topic: Communism
Value and Price: An Extract from Capital and Interest, 1973
Translation of Wert und Preis; partial contents: The Two Concepts of Value - Nature and Origin of Subjective Value - Insignificance of the Idea of Abstract Categorical Value
Related Topic: Prices

The introductory paragraph uses material from the Wikipedia article "Eugen Böhm von Bawerk" as of 18 Jun 2018, which is released under the Creative Commons Attribution-Share-Alike License 3.0.