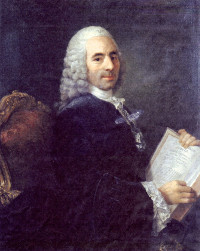 François Quesnay (4 June 1694 – 16 December 1774) was a French economist and physician of the Physiocratic school. He is known for publishing the "Tableau économique" (Economic Table) in 1758, which provided the foundations of the ideas of the Physiocrats. This was perhaps the first work attempting to describe the workings of the economy in an analytical way, and as such can be viewed as one of the first important contributions to economic thought. His Le Despotisme de la Chine, written in 1767, describes Chinese politics and society, and his own political support for constitutional Oriental despotism.

François Quesnay was the leading figure of the Physiocrats, generally considered to be the first school of economic thinking. ... it was Quesnay who coined the term 'laissez-faire, laissez-passer.' ... His first work appeared only as encyclopedia articles in 1756 and 1757. In his Tableau économique, he detailed his famous zigzag diagram, a circular flow diagram of the economy that showed who produced what and who spent what, in an attempt to understand and explain the causes of growth. ... That Quesnay had such a seminal influence on economics is all the more surprising in light of the fact that he served under Louis XV in Versailles not as an economist, but as a medical doctor.

Francois Quesnay / Biography
The Encyclopedia on Political Economy, The School of Cooperative Individualism

Francois Quesnay was born in Seine-and-Oise, June 4 1694, of a father who worked as a ploughman and merchant. ... he registered at the university and the college of surgery, receiving his degree in 1717. ... Encouraged to collaborate on the Encyclopaedia, Quesnay delivers initially the articles 'Obviousness' and 'Farmers' (political economy), which appear in volume VI (1756), then 'Grains', which appears in volume VII (1757). But the attack of Damiens (January 5, 1757) makes him withdraw three other articles that he had prepared: 'Interest of the money', 'Men' and 'Taxes'.
Quesnay - Biographie
In French, abridged translation available in "The Encyclopedia on Political Economy"; includes links to two memorial essays (also in French)

"Physiocrat" referred to ideas popularized by Francois Quesnay (1694-1774), a nobleman's son who made himself a surgeon and bought his post as physician to King Louis XV and his influential courtesan Madame de Pompadour. Historians Will and Ariel Durant wrote that although Quesnay "was a self-confident dogmatist in his works, he was in person a kindly soul, distinguished by integrity in an immoral milieu." Quesnay attacked taxes and trade restrictions in his articles for the Encyclopédie (1756), his own little book Tableau économique (1758), and elsewhere.
Related Topics: John Adams, Bureaucracy, France, Free Trade, Gold Standard, Government, Labor, Money, Freedom of Religion, Joseph Schumpeter, Slavery, Adam Smith, Freedom of Speech, Taxation, Alexis de Tocqueville, Anne Robert Jacques Turgot
Cantillon for Laymen, by Karen De Coster, Mises Daily, 7 Jun 2006
Discusses in general terms the themes in Richard Cantillon's Essai sur la nature du commerce en général (1755), including a short biographical section

[The] Physiocrats, the first "school" of economists ... began as an assemblage of French, laissez-faire intellectuals opposing the oppressive reign of Louis XIV ... [were] influenced by Cantillon's still unpublished Essai ... François Quesnay, the most notable of that group, and fellow traveler A.R.J. Turgot ... were heavily influenced by Cantillon. Quesnay's circular-flow model, the Tableau Économique, drew heavily from Cantillon's discussion of the circulation of money in an economy of rural and urban sectors as well as Cantillon's own version of a circulation model.
Related Topics: Richard Cantillon, Entrepreneurs, Friedrich Hayek, Israel Kirzner, Murray N. Rothbard, Adam Smith
The Early Economists Who Tried to Save France, by Richard Ebeling, 31 Oct 2016
Discusses the Physiocrats, focusing on Quesnay and Turgot

For two decades Quesnay served as royal physician to the king of France, Louis XV. But his attention and interests were focused equally on the social system and its functioning. He blended his knowledge of agriculture with his training as a medical doctor. He insisted that it was the production of the land–resources and food production–that was the basis of all prosperity in society. Manufacturing and industrial crafts were derivative and not primary sources of wealth ... Thus, in the division of labor, it was the agricultural sectors that were the foundation of society and its economic wellbeing, Quesnay argued.
Related Topics: France, Free Market, Free Trade, Government, Taxation, Anne Robert Jacques Turgot
Physiocracy, by George H. Smith, The Encyclopedia of Libertarianism, 15 Aug 2008
Discusses the Physiocrats, focusing mostly on Quesnay and his Tableau Économique

The founder of physiocracy was François Quesnay, physician to Madame de Pompadour and Louis XV. Having gained an international reputation in medicine with ... five books, Quesnay acquired his interest in economic theory late in life, publishing ... on the subject in Diderot's Encyclopedia at age 62. The publication, in 1758, of [his] Tableau Économique signaled the beginning of the physiocratic movement ... According to Quesnay, only this productive class is capable of producing new wealth (i.e., a "net product" that exceeds the expense of maintaining workers and other costs of production).
Related Topics: Economics, Free Trade, Adam Smith
The Physiocrats, by Wendy McElroy, Freedom Daily, Dec 2010
Discusses the 18th century French economists and their influences on Adam Smith, on American agriarianism and on Henry George

Indeed, Smith was so influenced by the Physiocrats that he had intended to dedicate The Wealth of Nations to François Quesnay, the leading figure of the school; perhaps his several significant disagreements with Quesnay dissuaded him. ... Quesnay was not merely the leading Physiocrat but also the court physician to Louis XV, who called him 'my thinker.' Respected in Parisian intellectual circles, Quesnay became famous for his Tableau economiques or Economic Table (1758) — an economic model that formed a basis for Physiocratic theory.
Related Topics: France, Benjamin Franklin, Henry George, Thomas Jefferson, Adam Smith, Taxation, Anne Robert Jacques Turgot
The School and its Doctrines, by Henry Higgs, The Physiocrats, 1897
Chapter II, discussing Quesnay and his writings

François Quesnay, the founder of the school of the Économistes (or, as they came to be called in later years, the Physiocrates), was born at Méré near Versailles on the 4th of June 1694, the same year as Voltaire, and died at Versailles on the 16th December 1774, the same year as Louis XV. ... he made ... the acquaintance of Mirabeau, and it was after discussion with that writer that he printed his Tableau Oeconomique in December 1758 ... We shall find him inspiring much of the work of other men ... but ... the Tableau Oeconomique may serve to explain at once the main doctrines of the master and the school.
Science, Reason, and Moral Progress, by Michael Shermer, Cato Policy Report, Jan 2015
Argues that the progress made in the domain of morality in the past few centuries resulted primarily from the Scientific Revolution (Copernicus, Newton, etc.) and the Enlightment that followed it

One of these physiocrats, François Quesnay — a physician to the king of France who later served as an emissary to Napoleon for Thomas Jefferson — modeled the economy after the human body, in which money flowed through a nation like blood flows through a body, and ruinous government policies were like diseases that impeded economic health. He argued that even though people have unequal abilities, they have equal natural rights, and so it was the government's duty to protect the rights of individuals from being usurped by other individuals, while at the same time enabling people to pursue their own best interests.
Related Topic: Free Trade

Francois Quesnay, by Marginal Revolution University, Great Economists: Classical Economics and Its Forerunners, 15 Sep 2015
Short video on Quesnay and the Physiocrats, including his "Tableau", their ideas for a single tax on land, on free trade, and recommended supplementary reading

The introductory paragraph uses material from the Wikipedia article "François Quesnay" as of 14 Jul 2018, which is released under the Creative Commons Attribution-Share-Alike License 3.0.