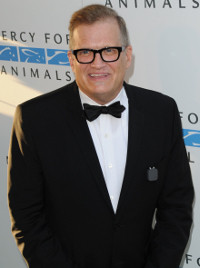 Drew Allison Carey (born 23 May 1958) is an American actor, comedian, sports executive and game show host. After serving in the U.S. Marine Corps and making a name for himself in stand-up comedy, Carey eventually gained popularity starring in his own sitcom, The Drew Carey Show, and serving as host of the U.S. version of the improv comedy show Whose Line Is It Anyway?, both of which aired on ABC.

Here’s what TV sitcom star Drew Carey doesn't like: censorship, anti-smoking laws, drug laws, immigration laws, "stupid big government in general" — and award shows. ... Here’s what Drew Carey does like: freedom, competition, free minds, free markets, and — he won't deny — beer, dirty jokes, and gambling. Those likes and dislikes tell you pretty much everything you need to know about Carey. He's not afraid to speak his mind. He's proud of his blue-collar sensibilities. And he's a libertarian. Carey left no doubts about his political philosophy in a November 1997 interview with Reason magazine.
Related Topic: Reason

Reason: Much of your humor pokes fun at liberal Hollywood sensibilities. What kind of response does that provoke from your peers?
Drew Carey: People look at me like a drunk uncle ... Everybody in Hollywood loves symbolic gestures. Have you been to the Hard Rock Casino in Vegas? There's nothing save-the-planetish about it. Hollywood people are filled with guilt: white guilt, liberal guilt, money guilt. They feel bad that they're so rich, they feel they don't work that much for all that money–and they don't, for the amount of money they make. There's no way I can justify my salary level, but I'm learning to live with it.
Related Topics: Television Shows, War on Drugs, Government, Humor, Nevada, Freedom of Speech

The introductory paragraph uses material from the Wikipedia article "Drew Carey" as of 2 Jun 2018, which is released under the Creative Commons Attribution-Share-Alike License 3.0.