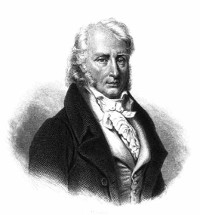 Henri-Benjamin Constant de Rebecque (25 October 1767 – 8 December 1830), or simply Benjamin Constant, was a Swiss-French political activist and writer on politics and religion. He was the author of a partly biographical psychological novel, Adolphe. He was a fervent liberal of the early 19th century, who influenced the Trienio Liberal movement in Spain, the Liberal Revolution of 1820 in Portugal, the Greek War of Independence, the November Uprising in Poland, the Belgian Revolution and Liberalism in Brazil and Mexico.

Henri-Benjamin Constant de Rebecque was born in Lausanne, Switzerland, and died in Paris. He was a novelist, political theorist, journalist, and politician who, through his education and personal inclination, brought English and Scottish notions of liberal constitutional monarchy to France. It was unusual for members of his generation to study in Germany (Erlangen) and Scotland (Edinburgh), but his experience enriched classical liberalism by combining the theoretical French passion for liberty with an appreciation of English constitutional monarchism and the evolutionary and historical approach of the Scottish school of liberal thought.
Related Topics: France, Liberty, Freedom of Speech

Ancient Greece's Legacy for Liberty: Personal Freedom in Athens, by Roderick T. Long, 24 Sep 2015
Discusses the political system of ancient Athens and the personal liberties it afforded its citizens, resident aliens and slaves

In his 1819 essay 'The Liberty of the Ancients Compared With That of the Moderns,' Benjamin Constant argued that the ancient Greco-Roman conception of liberty was primarily concerned with the freedom to participate in the collective decisions of the state, not the freedom to live one's own life free of state interference. But ... Constant made an exception for Athens: 'There was in antiquity a republic where the enslavement of individual existence to the collective body was not as complete as I have described it. This republic was the most famous of all: you will guess that I am speaking of Athens. ...'
Related Topics: Democracy, Individual Liberty, Freedom of Speech
Benjamin Constant, Eloquent Defender of Freedom, by David Boaz, 25 Oct 2017
Tribute to Constant, written on the 250th anniversary of his birth, with quotes from his speech "The Liberty of the Ancients Compared with That of the Moderns"

Today is the 250th anniversary of the birth of Benjamin Constant, a prominent French liberal in the postrevolutionary era, whom Isaiah Berlin called "the most eloquent of all defenders of freedom and privacy." He is perhaps best known in our time as the author of an essay ... called "The Liberty of the Ancients Compared with That of the Moderns." He argued that the ancient concept of liberty as political participation was not suited to modern society, in which people were busy with the production of wealth ... The essay was enormously influential in the development of Continental liberalism ...
Related Topics: Government, Liberty
The Cruel Joke of Sacralizing Voting, by Sheldon Richman, The Goal Is Freedom, 7 Feb 2014
Comments on an MSNBC TV spot implying that voting is the only way to express oneself that really counts

Benjamin Constant, the early nineteenth-century French (though Swiss-born) classical liberal, would call it a manifestation of the ancients' mentality ... In his 1816 essay, "The Liberty of Ancients Compared with That of Moderns," Constant contrasted how people in the two eras viewed the idea of liberty. In the modern era, he wrote, here is how people think about freedom: "For each of them it is the right to be subjected only to the laws, and to be neither arrested, detained, put to death or maltreated in any way by the arbitrary will of one or more individuals. It is the right of everyone to express their opinion ..."
Related Topics: Personal Responsibility, Voting
How Nationalism and Socialism Arose from the French Revolution, by Dan Sanchez, 12 Apr 2017
Examines how three crucial ideas (liberalism, nationalism and socialism) emerged around the same time (18th and 19th century) and how they depended on the rise of the modern people's state

After the fall of Napoleon and the restoration of the Bourbon monarchy, one of France's leading liberals addressed the question: what went so wrong? Benjamin Constant answered that many of the Revolution’s 'evils' stemmed from a confusion between two kinds of liberty. In an 1819 essay, he discussed, 'The Liberty of Ancients Compared with that of Moderns.' According to Constant, the liberty of the modern world was individual freedom. This was the idea of liberty that emerged from the European towns with the rise of private commerce and industry.
Related Topics: American Revolutionary War, Frédéric Bastiat, Individual Liberty, John Locke, Ludwig von Mises, Socialism, The State
Individual Liberty and Civil Society, by Richard Ebeling, Feb 1993
Reflects on Benjamin Constant's lecture "The Liberty of the Ancients Compared with that of the Modems" on what liberty meant to the ancient Greeks vs. the 19th century Europeans and Americans and about the 20th century reversion to statism

For the modems, Constant said, liberty consisted of "peaceful pleasures and private independence." Modern men wished, Constant explained, "each to enjoy our own rights, each to develop our own faculties as we like best, without harming anyone ... Individual liberty, I repeat, is the true modem liberty." ... while a concern for the preservation of political liberty was essential ..., Constant believed that politics was a distraction from the proper affairs of free men, and these proper affairs were the peaceful pursuit and cultivation of their personal, family, commercial and voluntary societal relationships.
Related Topics: Friedrich Hayek, Individual Liberty, Society, The State
Libertarian Class Analysis, by Sheldon Richman, Future of Freedom, Jun 2006
Examines the class analysis of Charles Comte, Charles Dunoyer and Augustin Thierry and its basis on the work of J. B. Say, drawing on writings by Ralph Raico, Leonard Liggio, David M. Hart and Walter E. Grinder

As both Hart and Raico point out, Comte and Dunoyer also absorbed much from another great liberal, Benjamin Constant, who had penned important essays showing that an "era of commerce" had replaced the "era of war" and that the modern notion of liberty — the private life — was poles apart from the ancient notion of liberty — participation in politics. As Hart puts it,

Dunoyer was interested in the sentence "[t]he unique end of modern nations is peace (repos), and with peace comes comfort (aisance), and the source of comfort is industry," which nicely summed up his own thoughts on the true aim of social organisation.

Related Topics: John Bright, Capitalism, Libertarianism, Ralph Raico, Jean-Baptiste Say, The State, Taxation
Liberty in the Ancient World, by Roderick T. Long, The Encyclopedia of Libertarianism, 15 Aug 2008
Surveys the ancient civilizations in Sumeria, Hebrew Palestine, China, Greece and the Roman Republic and Empire, and their thoughts and practices about liberty

In his 1816 essay "The Liberty of the Ancients Compared with That of the Moderns," the French libertarian Benjamin Constant famously argued that the meaning of liberty in classical antiquity did not refer to a guaranteed private sphere of personal discretion, but rather to the freedom to participate in the direct and collective exercise of sovereignty—a form of liberty compatible with severe constraints on individual choice. For Constant, ancient liberty was suitable to warlike societies with small populations, but not to an advanced commercial civilization ...
Related Topics: China, Greece, India, Liberty

The introductory paragraph uses material from the Wikipedia article "Benjamin Constant" as of 6 Jul 2018, which is released under the Creative Commons Attribution-Share-Alike License 3.0.