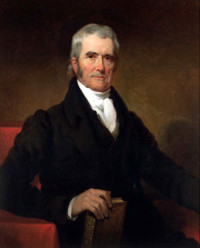 John Marshall (24 September 1755 – 6 July 1835) was an American politician and the fourth Chief Justice of the United States (1801–1835). His court opinions helped lay the basis for United States constitutional law and many say he made the Supreme Court of the United States a coequal branch of government along with the legislative and executive branches. Previously, Marshall had been a leader of the Federalist Party in Virginia and served in the United States House of Representatives from 1799 to 1800. He was Secretary of State under President John Adams from 1800 to 1801 and, at the age of 45, became the last of the chief justices to be born in Colonial America.

John Marshall (1755 - 1835) < Biographies < American History From Revolution to Reconstruction and beyond, by Richard Dixon

It was during his service in the House of Delegates that he participated in the Virginia Convention debates about the adoption of the Constitution. Patrick Henry spoke in opposition. Marshall was chosen to speak in favor of a strong judiciary. His later views about the importance and power of a strong federal judicial system ... were clearly expressed in this speech. ... Jefferson ... wished to bring the courts under the domination of the executive branch. Marshall's opinion in Marbury v. Madison showed his intellectual and moral force and foreshadowed the views he would express in later decisions.

John Marshall is best known as the 'Great Chief Justice' for his role in creating the modern Supreme Court. He served from 1801 until 1835 and his influential decisions, such as Marbury v. Madison, helped shape the principle of judicial review. With the largest collection of original Marshall family pieces, guided tours of his home offer an in-depth look at the formation of American government through the lens of the federal judiciary. Marshall built his home in Richmond's historic Court End neighborhood in 1790 and lived there for forty-five years until his death.

Born in Fauquier County on 24 September 1755, John Marshall became the fourth chief justice of the United States Supreme Court. ... Marshall performed one last service to the commonwealth in 1829-1830 when he joined James Monroe and James Madison as delegates to the Virginia constitutional convention. In 1800 Marshall agreed to write a biography of George Washington. ... As a friend of the first president, Marshall had announced Washington's death in 1799, had offered the eulogy, had chaired the committee that arranged the funeral rites, and had led the commission that planned a monument in the nation's capital.
Related Topic: United States Constitution
John Marshall - Online Library of Liberty
Includes short profile and link to Marshall's biography of George Washington

John Marshall was the Third Chief Justice of the United States and was chosen by George Washington's executor to write an authorized biography of him.

Near the close of this book, the author quotes John Marshall speaking to the House of Representatives shortly after Washington's death as saying: "Our WASHINGTON is no more! the hero ... lives now only in his own great actions, and in the hearts of an affectionate and afflicted people."
Related Topics: United States Constitution, Founding Fathers, Slavery, George Washington
Getting Inside the Cult, by Ryan McMaken, 11 Dec 2000
Argues that the decisions by the Florida and U.S. Supreme Courts in attempting to resolve the 2000 presidential election "cracked" the "cult of judicial supremacy" as judges began "to show their true colors" instead of "their supposed judicial restraint"

The vast majority of Americans hold the judicial system in high esteem ... This is due largely to Chief Justice John Marshall's assertion in 1803 that the Supreme Court has the right of judicial review in federal law. No such thing was written into the Constitution, but Marshall managed to turn it into a massive power grab for the judicial system. Marshall wanted to turn the court into a body of sages aloof from common politics. ... When Marshall declared that President Andrew Jackson's Indian policy was unconstitutional, Jackson ignored the decision and said, 'Mr. Marshall has made his decision, now let him enforce it.'
Related Topic: United States Constitution
States' Rights vs. Monetary Monopoly, by Thomas DiLorenzo, 9 May 2003
Recounts the story of how various states and Andrew Jackson maneuvered against the second Bank of the United States (BUS) eventually causing it not to be re-chartered

Knowing that such taxes could destroy the central bank, the federal government brought suit in Maryland (McCulloch vs. Maryland), confident that John Marshall, chief justice of the Supreme Court and a proponent of the BUS, would rule in its favor. He did, coining the famous phrase that 'the power to tax involves the power to destroy' in his decision. ... After Marshall's 1819 opinion, Ohio enacted a $50,000 per year tax on the BUS. ... The BUS sued Ohio, relying on Marshall's opinion. ... Marshall was wrong, the Ohioans said, because his opinion unconstitutionally encroached upon the sovereignty of the states.
Related Topics: Andrew Jackson, Ohio, United States, Woodrow Wilson
What This Country Needs Is A Good, Old-Fashioned Constitutional Crisis, by Gary North, 7 Dec 2000
Discusses the attempts by Al Gore to annul Florida's Electoral College votes in the 2000 U.S. presidential election and the benefits of the resulting crisis if the Florida legislature were to act to name the electors (as provided for in the Constitution)

... the Marbury v. Madison decision ... interposed a new doctrine, unforeseen by most of the Constitution's Framers: judicial review. ... With this doctrine and a majority on the Court, the Federalist Party's supreme politician, Chief Justice John Marshall, hamstrung the Jeffersonians for over three decades. ... A few years of political gridlock and nasty partisan recriminations about the 'Florida robbery' would go a long way to encourage a re-examination of the Constitution and what it was intended to achieve, as well as what it failed to achieve because the Framers did not see John Marshall coming.
Related Topics: United States Constitution, Florida, James Madison

WILLIAM MARBURY v. JAMES MADISON, Secretary of State of the United States, Feb 1803
The decision, delivered by then Chief Justice Marshal, where he argued that the U.S. Supreme Court had the privilege of reviewing legislation and declaring it void, if deemed to be contrary to the Constitution

At the last term, on the affidavits then read and filed with the clerk, a rule was granted in this case, requiring the secretary of state to show cause why a mandamus ... should not issue, directing him to deliver to William Marbury his commission as a justice of the peace for the county of Washington, in the district of Columbia. ... These principles have been, on the side of the applicant, very ably argued at the bar. In rendering the opinion of the court, there will be some departure in form, though not in substance, from the points stated in that argument.
Related Topic: United States Constitution

The introductory paragraph uses material from the Wikipedia article "John Marshall" as of 1 May 2018, which is released under the Creative Commons Attribution-Share-Alike License 3.0.