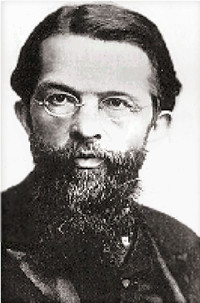 Carl Menger (23 February 1840 – 26 February 1921) was an Austrian economist and the founder of the Austrian School of economics. Menger contributed to the development of the theory of marginalism (marginal utility), which rejected the cost-of-production theories of value, such as were developed by the classical economists such as Adam Smith and David Ricardo. Menger used his "Subjective Theory of Value" to arrive at what he considered one of the most powerful insights in economics: both sides gain from exchange.

Carl Menger was a professor of economics at the University of Vienna and the founder of the Austrian School of economic thought. Among economists, he ranks as the 19th century's greatest contributor to the theory of spontaneous order—the social-scientific tradition supporting the libertarian view that a free society can generate beneficial and sophisticated institutions without state involvement. Menger's highly original approach to the formation of market prices and institutions marked an important advance over the classical economics of Adam Smith ...
Related Topics: Labor, Money

Austrian School founder Menger (1840-1921), along with but independently of William Jevons and Leon Walras, developed marginal utility analysis. This shows that the value of something in the marketplace is ultimately determined by customers. For instance, if we're very thirsty the first few drinks might be worth a lot of money to us, but as we become satisfied the value (or marginal utility) of each additional glass declines. Menger observed that private individuals, not governments, developed the essential social insitutions of a free society, such as language and money.

Carl Menger was an economic theorist and professor. Chiefly notebooks, notes, teaching materials, correspondence, biographical and personal material, and printed material (7500 items, 10 lin. ft; dated 1857-1985), relating to Menger's academic career, 1867-1920. The bulk of the collection consists of Menger's notes and revisions on economic and theoretical topics, and on his first major work, Grundsätze der Volkswirthschaftslehre. Includes extensive material about money, the gold standard, and capital theory. ... Letters to Menger are primarily from colleagues of the Austrian school of economists ...

Carl Menger: The Founder of the Austrian School, by Joseph Salerno
Biographical and bibliographical essay, discussing his life and work and delving into various aspects of Austrian economic theory as presented by Menger

Despite the many illustrious forerunners in its six-hundred year prehistory, Carl Menger (1840-1921) was the true and sole founder of the Austrian school of economics proper. He merits this title if for no other reason than that he created the system of value and price theory that constitutes the core of Austrian economic theory. But Menger did more than this: he also originated and consistently applied the correct, praxeological method for pursuing theoretical research in economics. Thus in its method and core theory, Austrian economics always was and will forever remain Mengerian economics.
Related Topics: Economic Resources, Austrian Economics, Entrepreneurship, Praxeology, Prices, Property
A Critique of Monetarist and Austrian Doctrines on the Utility and Value of Money, by Richard Timberlake, The Review of Austrian Economics, 1987
Examines the differences and similarities between the writings of monetarists such as Irving Fisher and Austrian economists such as Ludwig von Mises on the topic of money, contrasting them with the meager explanations of John Maynard Keynes

The concept of subjective utility in economic analysis was introduced by Carl Menger, and, contemporaneously, by the English economist William Stanley Jevons and the French economist Leon Walras in the great triple coincidence of economic thought (Schumpeter ...). Menger developed a table showing assumed cardinal values for the declining marginal utilities often economic goods as envisioned by some economic man. However, he did not defend the simplifying assumption of cardinality for the utility schedule, nor did he include either an income constraint or a utility schedule for money.
Related Topics: Austrian Economics, William Harold Hutt, Money, Prices, Murray N. Rothbard, Joseph Schumpeter
Eugen von Böhm-Bawerk: A Sesquicentennial Appreciation, by Richard Ebeling, The Freeman, Feb 2001
Broad biographical essay, including Böhm-Bawerk relationships with Menger, Mises and Schumpeter, and his two major works

Menger argued that the labor theory of value was flawed in presuming that the value of goods was determined by the relative quantities of labor that had been expended in their manufacture. Instead, Menger formulated a subjective theory of value, reasoning that value originates in the mind of an evaluator. ... Labor ... like raw materials and other resources, derives value from the value of the goods it can produce. From this starting point Menger outlined a theory of the value of goods and factors of production, and a theory of the limits of exchange and the formation of prices.
Related Topics: Austria, Eugen von Böhm-Bawerk, Capital Goods, Austrian Economics, Minimum Wage Laws, Ludwig von Mises, Prices, Joseph Schumpeter, Wages
Frédéric Bastiat and Subjective Marginal Utility, by Sheldon Richman, The Goal Is Freedom, 2 Aug 2013
After discussing marginal utility as presented by Menger and the Austrian school, examines how Bastiat anticipated many of the same concepts in his writings

As Menger wrote in his path-breaking Principles of Economics,

Up to the time of Carl Menger, founder of the Austrian school in the late 19th century, much of classical economics was preoccupied with what was regarded as objective, wealth for example, which purportedly existed apart from human plans and purposes. Menger put acting, valuing man at the center of economic study. For Menger, understanding economic phenomena meant seeing them through the eyes of the relevant actors ... In a market economy consumers endow objects with value, then, following Menger's key principle, value flows from those objects back to the factors of their production.
Related Topics: Government, Ludwig von Mises, Philosophy
Hayek and the Scots on Liberty [PDF], by Gerald P. O'Driscoll, Jr., The Journal of Private Enterprise, 2015
Explores the influence of the eighteenth-century Scottish moral philosophers, mainly David Hume and Adam Smith, on Hayek's thinking about liberty and concepts such as natural law theory

Menger ... argued that a 'portion' of social phenomena 'is not the result of agreement of members of society or of legislation'. He continued: 'Language, religion, law, even the state itself, and, to mention a few economic social phenomena, the phenomena of markets, of competition, of money, and numerous other social structures are already met with in epochs of history where we cannot properly speak of a purposeful activity of the community as such directed at establishing them'. On the same page, he then famously posed 'perhaps the most noteworthy problem of the social sciences.'
Related Topics: F. A. Hayek, David Hume, Adam Smith

The life and times of F.A. Hayek, who explained why political liberty is impossible without economic liberty, by Jim Powell, 2000
Lengthy biographical essay, with extensive quotes; alternate version of "The Worst on Top" chapter of The Triumph of Liberty (2000)

Hayek was drafted into the Austrian army in March 1917 and spent about a year on the Italian front. He contracted malaria but passed time reading about the Austrian School of economics which maintained that market prices are driven by the subjective valuations of customers. "I really got hooked," he recalled, "when I found [Carl] Menger's Grundsatze [Principles of Economics] such a fascinating book, so satisfying." Hayek was especially interested in Menger's "conception of the spontaneous generation of institutions."
Related Topics: Capitalism, Democracy, Milton Friedman, Government, F. A. Hayek, Frank Knight, Law, Rule of Law, Liberty, Ludwig von Mises, Money, Mont Pelerin Society, Nobel Prize, George Orwell, Karl Popper, Socialism, Thomas Sowell, Vienna

Then Mises had a revelation: "Around Christmas, 1903, I read Menger's ... [Principles of Economics] for the first time. It was the reading of this book that made an 'economist' of me." ... Menger's great book, published in 1871, presented a case that prices reflected the subjective values of customers in free markets. This was a radical departure from the English classical economists who, since Adam Smith, had insisted the value of things was rooted in the cost of labor required to produce them—the labor theory of value that Karl Marx made his battle cry.
Related Topics: Austria, Eugen von Böhm-Bawerk, Bureaucracy, Central Banking, Foundation for Economic Education, Gold Standard, Henry Hazlitt, Ludwig von Mises, Money, Mont Pelerin Society, Ayn Rand, Socialism, War
Principles of Economics by Carl Menger, by Roger R. Ream, The Freeman, Feb 1982
Review of Menger's Grundsätze der Volkswirtschaftslehre (Principles of Economics) which, although first published in German in 1871 was only translated to English in 1950 and reprinted by the Institute of Humane Studies in 1981

[I]t was Menger's Grundsätze (1871) ... that began the modern period of economic thought. Significantly, Menger's ideas provided the foundation for what is today classified as the Austrian School of economics ... Menger is perhaps best known for his development of marginal utility theory, discovered almost simultaneously by Jevons and Walras ... It was Menger who elaborated the logical foundations of marginal utility theory and it was his Principles specifically that served as the basic textbook for the Austrian economists (Bohm-Bawerk, Mises, and Hayek in particular) who followed him.
Related Topic: Economics
A Three-Pronged Blunder, or, what Money is, and what it isn't, by George Selgin, 27 Oct 2021
Examines the common, three-part textbook definition of money, offering counterarguments for the "store of value" and "unit of account" parts, reviewing what Jevons and Menger wrote about money's functions

Anyone familiar with Menger's famous theory of the evolution of money will know that he identifies it with the most readily accepted or "saleable" of an economy's goods or assets. Like Jevons, Menger recognizes that money typically performs other functions, but these he regards as secondary. Thus, when Menger observes ... that "Under conditions of developed trade, the only commodity in which all others can be evaluated without roundabout procedures is money," he isn't defining money as a medium of account: he's merely observing ... that an established money will also tend to be an economy's most convenient medium of account.
Related Topics: Brazil, Austrian Economics, Money, United Kingdom

Carl Menger and His Legacy in Economics
by Bruce Caldwell (editor), 1991
Annual supplement to History of Political Economy, volume 22; papers of conference held 15-17 Apr 1989 to commemorate acquisition of the Menger papers

The introductory paragraph uses material from the Wikipedia article "Carl Menger" as of 23 Jul 2018, which is released under the Creative Commons Attribution-Share-Alike License 3.0.