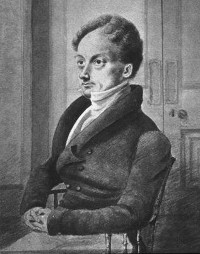 James Mill (born James Milne, 6 April 1773 – 23 June 1836) was a Scottish historian, economist, political theorist and philosopher. He is counted among the founders of the Ricardian school of economics. His son, John Stuart Mill, was also a noted philosopher of liberalism, utilitarianism and the civilizing mission of the British Empire.

Of humble background, James Mill (née Milne) was born in Montrose, Scotland, the son of a cobbler. Encouraged by his mother, Mill attended to his studies and eventually, in 1790, enrolled at the University of Edinburgh with the help of a local gentleman, Sir John Stuart (after whom Mill later named his son). At Edinburgh, he came under the influence of the philosopher Dugald Stewart and imbibed the legacy of the Scottish Enlightenment, including the economic works of Adam Smith. ... Mill's role in the history of both economics and philosophy is largely as a popularizer of existing theories, rather than as an original thinker.
James Mill - Online Library of Liberty
Includes portrait, short biography and links to several of Mill's works and to selected quotations

James Mill (1773-1836) was an early 19th century Philosophic Radical, journalist, and editor from Scotland. He was very influenced by Jeremy Bentham's ideas about utilitarianism which he applied to the study of British India, political economy, and electoral reform. Mill wrote on the British corn laws, free trade, comparative advantage, the history of India, and electoral reform. His son, John Stuart, after a rigorous home education, became one of the leading English classical liberals in the 19th century.

Government, Encyclopædia Britannica, 1820
Discusses the purpose of government, the means for attaining that end and various related questions and objections; rationalises that representative democracy, as exhibited in early 19th century Britain, is most conducive to "good Government"

The question with respect to Government is a question about the adaptation of means to an end. Notwithstanding the portion of discourse which has been bestowed upon this subject, it is surprising to find, on a close inspection, how few of its principles are settled. The reason is, that the ends and means have not been analyzed; and it is only a general and undistinguishing conception of them, which is found in the minds of the greatest number of men. Things, in this situation, give rise to interminable disputes; more especially when the deliberation is subject, as here, to the strongest action of personal interest.
Related Topics: Democracy, Government, Pursuit of Happiness, Labor, Property, Taxation
Liberty of the Press, Encyclopædia Britannica, 1823

The task of pointing out which of the acts, capable of being committed by the press, it would be expedient to prohibit under penalties, we trust will be found to be greatly diminished, by what we have already established in the articles Government and Jurisprudence. There is scarcely a right, for the violation of which, scarcely an operation of government, for the disturbance of which the press may not be employed as an instrument. The offences capable of being committed by the press are indeed nearly co-extensive with the whole field of delinquency.
Related Topic: Freedom of the Press
On the Overproduction and Underconsumption Fallacies [PDF], by James Mill, George Reisman (editor, introduction), Commerce Defended, 1808
Excerpts from chapters VI "Consumption" and VII "Of the National Debt", edited and with introduction by Reisman (in Sep 2006)

The doctrine of Mr. Spence respecting consumption is not less worthy of examination than his doctrine concerning production. ... Have we not seen that when a country is prosperous, the laboring classes of the people are by necessary consequence in comfortable circumstances? that when the comforts of the laboring classes have decayed, the prosperity of the country is at least at a stand, a point from which declension is the consequence, natural and very difficult to be avoided? Since the subject is then of so much importance, let us hope that all those whom the opinion here stated may offend, will exert themselves to refute it.
Related Topic: Government

The introductory paragraph uses material from the Wikipedia article "James Mill" as of 28 Apr 2018, which is released under the Creative Commons Attribution-Share-Alike License 3.0.