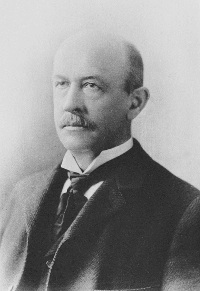 William Graham Sumner (30 October 1840 – 12 April 1910) was a classical liberal American social scientist. He taught social sciences at Yale, where he held the nation's first professorship in sociology. He was one of the most influential teachers at Yale or any other major school. Sumner wrote widely within the social sciences, with numerous books and essays on American history, economic history, political theory, sociology and anthropology. He supported laissez-faire economics, free markets and the gold standard. He adopted the term "ethnocentrism" to identify the roots of imperialism, which he strongly opposed. He was a spokesman against imperialism and in favor of the "forgotten man" of the middle class, a term he coined. He had a long-term influence on conservatism in the United States.

William Graham Sumner was an economist, a sociologist, and a leading defender of individualism and the free market. He opposed most of the reforms that coalesced in the progressivist program after 1900, and he also denounced American imperialism. ... In 'The Conquest of the United States by Spain' (1899), a speech delivered in the aftermath of the Spanish-American War, Sumner denounced American expansionism. The war began in political struggles in Washington and was fueled by reports of Cuba 'we now know to be false.' In annexing the Philippines, the United States was adopting the values for which it criticized Spain.

The man who financed the American Revolution, by Jim Powell
Lengthy biographical essay of Robert Morris, a signer of the Declaration of Independence (and other founding documents) and financier of the Revolutionary War

While historian William Graham Sumner acknowledged that 'There is no reason to doubt that he profited largely as an individual by all his connection with the public service,' Sumner went on to say: 'The public sought his services in the position of a statesman, not because he was a statesman, but because he was a merchant and banker, and they wanted the professional services of a merchant and banker. What his high-principled critics demanded was that ... in his private capacity he should abstain from any knowledge or opportunity of the public man ... He employed for the public all the knowledge or opportunities which he possessed.'
Related Topics: John Adams, American Revolutionary War, Money, Philadelphia, George Washington
My Life as a Libertarian, by Dominick T. Armentano, 21 Jul 2003
Lengthy autobiographical essay, describing among other things, how he took an interest in antitrust policy and wrote several books and articles on the subject, and his disappointment when attempting to stop Connecticut from imposing a state income tax

I received my Ph.D. in economics ... with a dissertation on the political economy of the brilliant, late 19th century classical liberal, William Graham Sumner. Sumner taught at Yale between 1870 and 1905 ... he had a fierce and fiery tongue and never gave an inch to enemies of liberty on either the left or right ... he strongly opposed the rise of U.S. Imperialism and Empire and wrote and spoke eloquently on why the Spanish/American war was a fatal mistake for American civil society. He opposed any and all welfare programs of government; as he put it bluntly, a drunk was in the gutter where he belonged.
Related Topics: Cato Institute, Austrian Economics, F. A. Hayek, Ayn Rand, Leonard Read, Murray N. Rothbard, Taxation
Non-Marxist Theories of Imperialism, by Alan Fairgate, Reason, Feb 1976
Examines writings of critics of imperialism that are not based on Marxist analysis

William Graham Sumner's essay 'The Conquest of the United States by Spain' ... provides an excellent introduction to the main elements of the anti-imperialist critique of American foreign policy. ... Sumner went on to develop the theme that republic and empire are antithetical concepts and that interventionism abroad would require the abandonment of America's traditional isolationist policies as well as her anticolonial heritage. Moreover, he argued, annexing overseas territories is morally wrong, violating such fundamental principles as liberty, democracy, equality, and self-government.
Related Topics: Latin America, Banking, John Bright, Richard Cobden, John T. Flynn, Foreign Entanglements, Garet Garrett, Imperialism, Leonard Liggio, Militarism, George Orwell, Murray N. Rothbard, Jean-Baptiste Say, Joseph Schumpeter, Adam Smith, Joseph R. Stromberg
Peace and Pacifism, by Robert Higgs, The Encyclopedia of Libertarianism, 15 Aug 2008
Reviews what prominent classical liberals and libertarians had to say on the subject of peace and war, as well as the history of United States wars from the War of 1812 to the 2003 invasion of Iraq and the efforts of those who opposed them

In 1899, [William Graham] Sumner wrote a tract called "The Conquest of the United States by Spain" to show how the U.S. embrace of imperialism undermined the nation's best traditions as a limited-government republic and presaged higher taxes, bigger armed forces, conscription, and conquest. As if to demonstrate the accuracy of Sumner's warning, the government immediately undertook to defeat the Filipinos who sought self-rule, savagely suppressing their insurgency during the Philippine-American War (1899–1902).
Related Topics: American War Between the States, Libertarianism, Ludwig von Mises, Murray N. Rothbard, Adam Smith, Freedom of Speech, Lysander Spooner, Vietnam War, War, World War I, World War II
The Roots of Modern Libertarian Ideas, by Brian Doherty, Cato Policy Report, Mar 2007
Survey of the history of libertarian ideas, from ancient China and Greece to 20th century writers; adapted from Radicals for Capitalism

Another 19th-century American libertarian thinker, of great public renown in his time, was the Episcopal priest and Yale University sociologist William Graham Sumner. Sumner was a great anti-imperialist as well as an advocate of laissez faire and a celebrator of the spirit of enterprise who saw that the market order is so brain-bustingly complex that government attempts to manipulate it are apt to lead to unpredictable and very likely negative results. Sumner celebrated "the forgotten man," the independent middle-class producer who gets torn between the plutocrats ... and the paupers who receive benefits from government reformers ...
Related Topics: Frédéric Bastiat, United States Declaration of Independence, England, Greece, The Law, Libertarianism, Gustave de Molinari, Franz Oppenheimer, Herbert Spencer, Lysander Spooner
The Spanish-American War: The Leap into Overseas Empire, Part 2, by Joseph R. Stromberg, Freedom Daily, Jan 1999
Discusses the Philippine-American War, that followed the Spanish-American War, and the actions and writings of the Anti-Imperialist League, William Graham Sumner and other opposed to the war and colonialism

The classical liberal sociologist William Graham Sumner, a strong anti-imperialist, had this to say, not long after the war: 'We were told that we needed Hawaii in order to secure California. What shall we now take in order to secure the Philippines? No wonder that some expansionists do not want to "scuttle out of China." We shall need to take China, Japan, and the East Indies, according to the doctrine, in order to "secure" what we have. Of course this means that, on the doctrine, we must take the whole earth in order to be safe on any part of it, and the fallacy stands exposed. ...'
Related Topics: China, Imperialism, Thomas Paine, Philippines, Adam Smith

The introductory paragraph uses material from the Wikipedia article "William Graham Sumner" as of 31 Jul 2018, which is released under the Creative Commons Attribution-Share-Alike License 3.0.