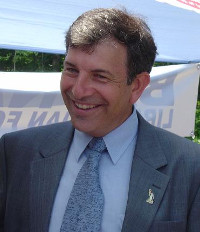 Michael J. Badnarik (born 1 August 1954) is an American software engineer, political figure and former radio talk show host. He was the Libertarian Party nominee for President of the United States in the 2004 elections, and placed fourth in the race, behind independent candidate Ralph Nader and the two major party candidates, George Bush and John Kerry. Two years later he ran as a Libertarian Party candidate in the 2006 congressional elections for Texas's 10th congressional district seat near Austin. In a three candidate field, Badnarik came in third, receiving 7,603 votes for 4.3% of the vote.

An open reply to John Hospers, by Brad Spangler, Rational Review, 25 Oct 2004
Response to a Hospers email endorsing George W. Bush over John Kerry or Michael Badnarik; includes the text of the email, dated 22 Oct 2004, after the reply to let "the reader make up their own mind"

"The crossroads picture painted for us, viewed in the context of later statements, is Bush and an imperfect Liberty or Kerry and Totalitarianism. Hospers pushes Badnarik aside before this point, but his doing so is contingent on the validity of Bush vs. Kerry being a clear choice in terms of libertarian ideals. If he can't support that adequately, Badnarik remains the obvious choice. ... There is no libertarian case for Bush. Give 'em hell, Mr. Badnarik, give 'em hell."
Related Topic: John Hospers
Conventional unwisdom: The Life of the Party, part 19, by Thomas L. Knapp, Rational Review, 1 Jun 2004
Related Topic: 2004 Libertarian National Convention
It Usually Begins With... Michael Badnarik?, by Jerome Tuccille, 3 Jun 2004
Laugh About It, Shout About It: To spoil or not to spoil in '04?, by Julian Sanchez, Reason, 1 Jun 2004
Libertarian Party Says It Will Drain Votes From Bush, by Susan Jones, CNSNews.com, 2 Jun 2004
Libertarians unite to elect Badnarik: Presidential candidate to take advantage of disenchanted voters, by Ron Strom, WorldNetDaily, 14 Jul 2004

"'The reason we can't find a relationship between the Constitution and our current government is that there is none,' declared Badnarik. ... 'If you were in prison and faced a 50% chance of death by lethal injection, a 45% chance of the electric chair, and had a 5% chance of escape, would you vote for lethal injection because it was the most likely outcome, or would you try for escape?' said Badnarik. 'Voting Libertarian is our only chance for political survival. Choosing the lesser of two evils is still choosing evil.'"
Michael Badnarik Thinks You're a Libertarian: Texas' Other Presidential Candidate Talks to the Dig, by Joe Keohane, Weekly Dig, 30 Jun 2004

"... asked whether governmental interference is the [principal] obstacle between Americans and the American ideal, Badnarik responds, 'I think that's very clear.' It's a notion bereft of the sort of contempt for voters seen emanating from the Democrat/Republican duopoly these days ..."
Preliminary polling data indicates Badnarik has the support to remove Bush from office, 18 Jul 2004
Press release from Badnarik for President

"Badnarik is consistently polling around one percent, as compared with Bush, Kerry, and Nader. According to John Zogby, one percent may not sound like a lot, but with 16 to 20 states considered 'battlegrounds' that are too close too call, this slim margin could determine the outcome of the contest."
The Libertarian Party Stays the Course: Reports from a political convention full of both surprises and the status quo, by Brian Doherty, Reason, 3 Jun 2004

"Badnarik has a very libertarian message about restricting the government strictly to its explicitly Constitutional duties ... The LP, as always, has its work cut out for it. And its hardcore devotees don't seem to want it any other way."
Related Topic: 2004 Libertarian National Convention
The metaphysics of Atlanta: The Life of the Party, Part 20, by Steve Trinward, Rational Review, 14 Jun 2004

"... I wonder how many ... of those one-to-one contacts Michael [Badnarik] has been making for the past nearly two years are going to result in new Libertarian activists, donors, contributors, candidates and other soldiers for the cause?"
Related Topic: 2004 Libertarian National Convention

"When countries tie themselves together in mutual defense pacts and alliances, they end up participating in foolish wars out of diplomatic obligation, rather than limiting themselves to legitimate self-defense. ... Getting other countries involved in defending and extending U.S. aggression is the wrong strategy."
Related Topic: Foreign Entanglements

An Interview with Michael Badnarik, by Michael Badnarik, R. W. Bradford, Liberty, Aug 2004
Badnarik answers questions ranging from basic biographical information to his classes on the Constitution, and in a follow-up, his responses to Fox News, his taxes, zip codes, Gary Nolan and Aaron Russo

"I grew up in Hammond, Ind. ... I went to Indiana University, where I ... majored in chemistry. I got a job at a nuclear plant in Zion, Ill. I was transferred from there to a nuclear simulator which is basically a $6 million computer game that they use to train nuclear operators. I moved to California in 1985 when I decided that cold and snow were 4-letter words and I worked for two years on the stealth bomber, then moved to San Luis Obispo to work for four years on the Diablo Canyon nuclear plant. In 1997, I relocated from California to Austin, Texas, where I worked as a computer consultant and a technical trainer."
Michael Badnarik Interview, by Michael Badnarik, Scott Horton, The Weekend Interview Show with Scott Horton
Three audio interviews: 25 Sep 2004, 30 Oct 2004 and 19 Nov 2005

This Fall, Every Vote Counts, But These Diabolical Third-Party Candidates Could Deny John Kerry Crucial Votes in Swing States, by Ted Rall, 7 Aug 2004

"What if Libertarian candidate Michael Badnarik costs Kerry the presidency? ... Conservatives disgusted by GITMO might pull away votes that rightly belong to Kerry ... Third-Party Spoilers: The Ultimate Danger to American Democracy!"

Good To Be King: The Foundations Of Freedom, 2004
Related Topic: United States Constitution

The introductory paragraph uses material from the Wikipedia article "Michael Badnarik" as of 06 Jun 2018, which is released under the Creative Commons Attribution-Share-Alike License 3.0.