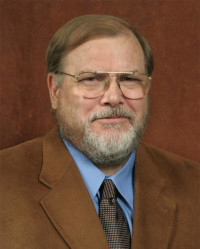 Bruce L. Benson (born 18 March 1949) is is an American academic economist who is recognized as an authority on law and economics and a major exponent of anarcho-capitalist legal theory. He is chair of the Department of Economics, DeVoe L. Moore Professor, Distinguished Research Professor and courtesy Professor of Law at Florida State University and the recipient of the 2006 Adam Smith Award, the highest honor bestowed by the Association of Private Enterprise Education. He is a Senior Fellow at the Independent Institute and has recently been a Fulbright Senior Specialist in the Czech Republic, Visiting Professor at the University de Paris Pantheonon Assas, a Property and Environment Research Center Julian Simon Fellow, and Visiting Research Fellow at the American Institute for Economic Research.

Benson has done important work showing that the private sector can do a better job than government resolving disputes and protecting people against crime. He has chronicled centuries of experience which makes clear that government's role in these areas is surprisingly recent and generally not very effective. His major works are The Enterprise of Law (1990) and To Serve and Protect: Privatization and Community in Criminal Justice (1998). He has contributed chapters to a dozen books and written nearly a hundred articles and reviews in scholarly journals. ... He received the Ludwig von Mises Prize.

Bruce L. Benson is a Senior Fellow at the Independent Institute; the DeVoe L. Moore Professor and Distinguished Research Professor Emeritus of Economics, Florida State University; and Contributing Editor of The Independent Review. Professor Benson is the author of the Independent books To Serve and Protect: Privatization and Community in Criminal Justice and The Enterprise of Law: Justice Without the State, and he is the editor of the Institute book Property Rights: Eminent Domain and Regulatory Takings Re-Examined.
Dr. Bruce L. Benson
Personal page maintained at Florida State University, last updated in 2008, includes biographical details, some pictures, academic and professional information and list of selected writings

I grew up in Harlem, Montana, entered college at the University of Montana (UM) in 1967, dropped out in December 1968, was drafted and entered the army in February 1969. After basic and advanced infantry training at Fort Lewis, Washington, I was sent to Vietnam where I spent a year in a combat infantry unit. ... My parents bought their first television set when I was 7. We got one channel, and that channel offered the 'game of the week' every Saturday during baseball season. The Yankees were on more than any other team ... Being a contrarian, I had to follow another team, and I picked the Red Sox.

Crime and Punishment in a Free Society, by Sheldon Richman, The Goal Is Freedom, 6 Dec 2013
Describes how customary law and the principle of restitution were corrupted by English kings into a system of government laws and punishment of crimes (originally, violations of the "king's peace")

In The Enterprise of Law, Bruce Benson explains that before the royal preemption, customary law prevailed in England. One feature of this spontaneous order was that "offenses are treated as torts (private wrongs and injuries) rather than crimes (offenses against the state or the 'society'). A potential action by one person has to affect someone else before any question of legality can arise; any action that does not, such as what a person does alone or in voluntary cooperation with someone else but in a manner that clearly harms no one, is not likely to become the subject of a rule of conduct under customary law."
Related Topics: England, Law

Libertarians have consistently argued that individuals should be free to consume mind-altering substances such as heroin, cocaine, marijuana, alcohol, and tobacco given that others are not harmed. When we examine spillover harms that are allegedly caused by the consumption of these products, they cannot stand muster ... [I]n light of consequences of the drug war, police interests, not the "public interest," seems to be at the root of the drug war. Thus, whether considered from the perspective of liberty or efficiency, prohibitionist policies cannot be justified.
Related Topics: War on Drugs, Economics, Prohibition, Right Against Unreasonable Searches and Seizures

The introductory paragraph uses material from the Wikipedia article "Bruce L. Benson" as of 26 Jun 2018, which is released under the Creative Commons Attribution-Share-Alike License 3.0.