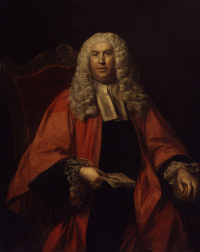 Sir William Blackstone SL KC (10 July 1723 – 14 February 1780) was an English jurist, judge and Tory politician of the eighteenth century. He is most noted for writing the Commentaries on the Laws of England. Born into a middle-class family in London, Blackstone was educated at Charterhouse School before matriculating at Pembroke College, Oxford in 1738. After switching to and completing a Bachelor of Civil Law degree, he was made a Fellow of All Souls, Oxford on 2 November 1743, admitted to Middle Temple and called to the Bar there in 1746. Following a slow start to his career as a barrister, Blackstone became heavily involved in university administration, becoming accountant, treasurer and bursar on 28 November 1746 and Senior Bursar in 1750. Blackstone is considered responsible for completing the Codrington Library and Warton Building, and simplifying the complex accounting system used by the college. On 3 July 1753 he formally gave up his practice as a barrister and instead embarked on a series of lectures on English law, the first of their kind. These were massively successful, earning him a total of £453 (£65,000 in 2018 terms), and led to the publication of An Analysis of the Laws of England in 1756, which repeatedly sold out and was used to preface his later works.

Sir William was a Judge of the Court of Common Pleas from an old Wiltshire family. ... In his thirtieth year, being disappointed of the Chair of Civil Law, for which he had been recommended to the Crown, be began, at the suggestion of the Solicitor-General, afterwards Lord Mansfield, to deliver a course of lectures on English Law, and these were so successful that he became the first occupant of the newly founded Vinerian Professorship in 1758. His success also brought him practice, a seat in the House of Commons and the Headship of New Inn Hall, Oxford, in 1761.

Sir William Blackstone's (1723-1780) four-volume Commentaries on the Laws of England assures him a place in history as one of the greatest scholars of English common law. Blackstone began his lectures on the common law in 1753. His Commentaries served as a primary instruction tool in England and America well into the nineteenth century and exerted a pronounced influence on the development of the American legal tradition.

The Courts and the New Deal, Part 1, by William L. Anderson, Freedom Daily, Jun 2005
First part of a four-part series examining how Franklin D. Roosevelt and his New Deal affected federal courts and other legal practices; contrasts the thoughts of Blackstone and Bentham

While we like to think of U.S. law originating with the Constitution, the real 'author' of the original legal system was William Blackstone, the great British jurist who wrote Commentaries on the Laws of England in the mid 1700s. ... It was Blackstone who championed the ideal of law as a shield of the innocent, a tool that in the hands of government was to protect the life, property, and liberty of individual persons. Law was not only to constrain (and punish) those who would steal or kill, but also to constrain the powers and activities of those who were part of the state.
Related Topics: Jeremy Bentham, United States Bill of Rights, Commerce Clause, United States Constitution, Law, Due Process of Law, Franklin D. Roosevelt
Forrest McDonald, "The Founding Fathers and the Economic Order", by Forrest McDonald, 19 Apr 2006
Speech given at the Economic Club of Indianapolis; contrasts the economic system the Founding Fathers intended to create with the one that was actually created

Let us start by considering what they understood by property rights. The appropriate source is Sir William Blackstone's 4 volume Commentaries on the Laws of England, a work that James Madison said was "in every man's hand." [In] "Of the rights of things," Blackstone defines property as "That sole and despotic dominion which one man claims and exercises over the external things of the world, in total exclusion of the right of any other individual in the universe." Splendid statement, but Sir William devotes the remaining 518 pages of the [second] volume to qualifying and specifying exceptions to his definition.
Related Topics: John Adams, United States Constitution, England, Founding Fathers, Free Market, Thomas Jefferson, Money
Natural Law and the American Tradition, by Davis E. Keeler, The Freeman, May 1981
Discusses the influence of Edward Coke and William Blackstone in early colonial America

In 1765, William Blackstone published his Commentaries on the Law and within a short time he became as well read in America as in England. These quotations are from an American edition published in Philadelphia in 1771: '... laws ... denote rules ... of human action ... that is the precepts by which man ... endowed with both reason and free will, is commanded to make use of those faculties in the general regulation of his behavior ... So when He created man ... He laid down certain immutable laws of human nature ... and gave him also the faculty of reason to discover the purport of those laws. ...'
Related Topics: Edward Coke, United States Declaration of Independence
The "Stable Bulwark of Our Liberties", by Sheldon Richman, The Goal Is Freedom, 13 Jun 2008
Reviews the Supreme Court majority opinion in the decision of the Boumediene v. Bush case, holding that Guantanamo Bay detainees can use the privilege of the writ of habeas corpus

The majority quoted the words of the renowned jurist William Blackstone (quoted by Alexander Hamilton in Federalist 84):

To bereave a man of life ... would be so gross and notorious an act of despotism as must at once convey the alarm of tyranny throughout the whole nation; but confinement of the person, by secretly hurrying him to jail, where his sufferings are unknown or forgotten, is a less public, a less striking, and therefore a more dangerous engine of arbitrary government.

As the Court noted, Blackstone described the Habeas Corpus Act of 1679 as the stable bulwark of our liberties.
Related Topics: Attacks of 11 September 2001, United States Constitution, Writ of Habeas Corpus, Due Process of Law

On the Origin and Character of Rights, The Freeman, Mar 1981
Selection extracted from Commentaries on the Laws of England (1765), Book I, Chapter I, "Of the absolute Rights of Individuals"

By the absolute rights of individuals we mean those which are so in their primary and strictest sense; such as would belong to their persons merely in a state of nature, and which every man is entitled to enjoy, whether out of society or in it ... where there is no law there is no freedom. But then, on the other hand, that constitution or frame of government, that system of laws, is alone calculated to maintain civil liberty, which leaves the subject entire master of his own conduct, except in those points wherein the public good requires some direction or restraint.
Related Topics: Law, Liberty, Rights

The introductory paragraph uses material from the Wikipedia article "William Blackstone" as of 14 Mar 2018, which is released under the Creative Commons Attribution-Share-Alike License 3.0.