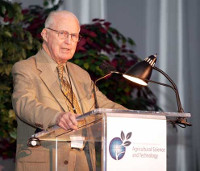 Norman Ernest Borlaug (25 March 1914 – 12 September 2009) was an American agronomist and humanitarian who led initiatives worldwide that contributed to the extensive increases in agricultural production termed the Green Revolution. Borlaug was awarded multiple honors for his work, including the Nobel Peace Prize, the Presidential Medal of Freedom and the Congressional Gold Medal.

The 'father of the Green Revolution' is one Nobel Peace Prize winner (1970) who fully deserved the honor. Not only did he help raise crop yields in the developing world so that literally billions of people didn't starve, he remains an outspoken critic of environmentalists who attack the biotechnology that will help wipe out world hunger, of international development programs that often do more harm than good, and of kleptocrats who fill their own stomachs while their citizens starve.
Related Topics: Milton Friedman, Barry Goldwater, Friedrich Hayek, Robert A. Heinlein, Jane Jacobs, Richard Nixon, Ron Paul, Ayn Rand, Julian Simon, Thomas Szasz, Rose Wilder Lane
Norman Earnest Borlaug - Hero of the Day, by John C. LeGere, The Daily Objectivist, 2000

Meet the man ... whose work, according to sober estimates, has led to the saving of a billion lives: Norman Borlaug, father of the Green Revolution, the man who fed the world. In 1963, after twenty years of research, Dr. Borlaug's team began shipping their hybrid 'Mexican Dwarf' wheat seeds to India, which was then importing one fifth of the American wheat harvest and still teetering on the edge of starvation. The new seeds soon more than doubled their yield of wheat per acre. In only five years India's annual crop surged from 12 million to 20 million tons. They now produce 70 million tons, and export wheat for the world market.

Who has saved more human lives than anyone else in history? ... Who still teaches at Texas A&M at the age of 86? The answer is Norman Borlaug. ... Borlaug grew up on a small farm in Iowa and graduated from the University of Minnesota, where he studied forestry and plant pathology, in the 1930s. In 1944, the Rockefeller Foundation invited him to work on a project to boost wheat production in Mexico. ... Borlaug and his staff in Mexico spent nearly 20 years breeding the high-yield dwarf wheat that sparked the Green Revolution, the transformation that forestalled the mass starvation predicted by neo-Malthusians.
Related Topics: Africa, Farming, Health, India, Technology, Transportation

The introductory paragraph uses material from the Wikipedia article "Norman Borlaug" as of 21 Jun 2018, which is released under the Creative Commons Attribution-Share-Alike License 3.0.