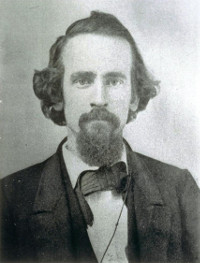 Henry George (1839-1897), American author and political economist, was born in Philadelphia, Penn., on 2 September 1839. He settled in California in 1858; removed to New York, 1880; was first a printer, then an editor, but finally devoted all his life to economic and social questions. In 1871 he published Our Land Policy, which, as further developed in 1879 under the title of Progress and Poverty, speedily attracted the widest attention both in America and in Europe. In 1886 he published Protection or Free Trade. Henry George had no political ambition, but in 1886 he received an independent nomination as mayor of New York City, and became so popular that it required a coalition of the two strongest political parties to prevent his election. He received 68,000 votes, against 90,000 for the coalition candidate. His death on 29 October 1897 was followed by one of the greatest demonstrations of popular feeling and general respect that ever attended the funeral of any strictly private citizen in American history. The fundamental doctrine of Henry George, the equal right of all men to the use of the earth, did not originate with him; but his clear statement of a method by which it could be enforced, without increasing state machinery, and indeed with a great simplification of government, gave it a new form. This method he named the Single Tax. His doctrine may be condensed as follows: The land of every country belongs of right to all the people of that country. This right cannot be alienated by one generation, so as to affect the title of the next, any more than men can sell their yet unborn children for slaves. Private ownership of land has no more foundation in morality or reason than private ownership of air or sunlight. But the private occupancy and use of land are right and indispensable. Any attempt to divide land into equal shares is impossible and undesirable. Land should be, and practically is now, divided for private use in parcels among those who will pay the highest price for the use of each parcel. This price is now paid to some persons annually, and it is called rent. By applying the rent of land, exclusive of all improvements, to the equal benefit of the whole community, absolute justice would be done to all. As rent is always more than sufficient to defray all necessary expenses of government, those expenses should be met by a tax upon rent alone, to be brought about by the gradual abolition of all other taxes. Landlords should be left in undisturbed possession and nominal ownership of the land, with a sufficient margin over the tax to induce them to collect their rents and pay the tax. They would thus be transformed into mere land agents. Obviously this would involve absolute free trade, since all taxes on imports, manufactures, successions, documents, personal property, buildings or improvements would disappear. Nothing made by man would be taxed at all. The right of private property in all things made by man would thus be absolute, for the owner of such things could not be divested of his property, without full compensation, even under the pretence of taxation. The idea of concentrating all taxes upon ground-rent has found followers in Great Britain, North America, Australia and New Zealand. In practical politics this doctrine is confined to the "Single Tax, Limited", which proposes to defray only the needful public expenses from ground-rent, leaving the surplus, whatever it may be, in the undisturbed possession of landowners.

This article is derived from the The Encyclopædia Britannica, Eleventh Edition article "George, Henry" published in 1911, which is in the public domain.